The global average temperature in 2020 was about 2.25 degrees Fahrenheit warmer than the average from 1850 to 1900, data from the Copernicus Climate Change Service indicates. …

The record warmth — which fueled deadly heat waves, droughts, intense wildfires and other environmental disasters around the world in 2020 — occurred despite the development in the second half of the year of La Niña, a global climate phenomenon marked by surface cooling across much of the equatorial Pacific Ocean.

And while 2020 may tie the record, all of the last six years are among the hottest ever, said Freja Vamborg, a senior scientist with the Copernicus Climate Change Service.

“It’s a reminder that temperatures are changing and will continue to change if we don’t cut greenhouse gas emissions,” Dr. Vamborg said.

suffered from deadly heat waves. But the temperature difference between 2020 and 2019 was striking: 2020 was 0.4 degrees Celsius, or nearly three-quarters of a degree Fahrenheit, warmer.

While not quite as drastic as in Europe, temperatures across North America were above average as well. The warming played 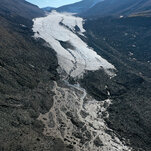