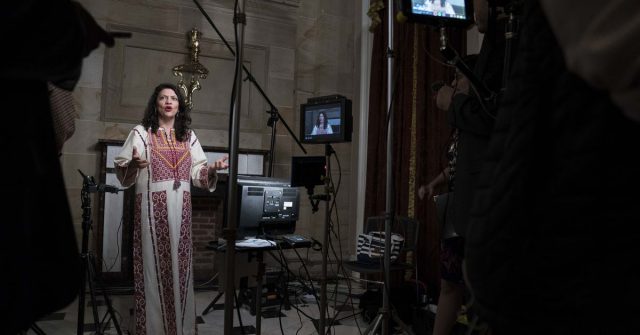 For some Democratic members of Congress, President Trump’s annual State of the Union address Tuesday night was a bridge too far. Over the course of the speech, at least three lawmakers walked out in protest, and many others who remained on the House floor were vocal about their displeasure.

Reps. Tim Ryan (D-OH), Rashida Tlaib (D-MI), and Bill Pascrell, Jr. (D-NJ) all left as Trump gave his address, which Tlaib described on Twitter as shameful and “beneath the dignity of the office.”

At least 10 House Democrats chose to boycott the speech outright, including high-profile freshmen Reps. Alexandria Ocasio-Cortez and Ayanna Pressley. Pressley described the event on Twitter as a “sham,” a sentiment later echoed by Ryan, who tweeted that the president’s speech was “all fake.”

Trump’s speech dwelt extensively on many of his favorite, expected topics, including the US Space Force, the economy, and the recently signed USMCA trade deal. However, he also strayed into disturbing anti-immigrant rhetoric, and interrupted his speech to honor conservative radio host Rush Limbaugh, who frequently employs racist and sexist talking points.

Other Democrats, who stayed for the duration of the speech, were no more complimentary than their counterparts who walked out. Rep. Chellie Pingree (D-ME) said the speech was “full of lies,” but joked on Twitter that she had to stay because she promised her colleagues a ride home afterward.

Fact-checking by CNN and the Washington Post bear Pingree’s statement out: According to the Post, the president’s speech included at least 31 false, distorted, or otherwise dubious claims.

Connecticut Senator Chris Murphy expressed regret for even attending: “I should not have gone,” he tweeted. “I get it — presidents use their last SOTU to make the case for re-election. But that crossed a line.”

In years past, House Republicans registered their discontent with President Barack Obama when he spoke before Congress. In 2009, South Carolina Rep. Joe Wilson shouted “you lie” in a special joint session. In 2014, now-former Rep. Steve Stockman walked out during the State of the Union address.

Ryan, a one-time 2020 presidential contender, later expanded on his tweet in a statement shared by reporter Edward-Isaac Dovere of the Atlantic on Twitter. “Tonight’s address clarified one thing,” Ryan said. “This President has no strategy for the future.”

Ryan also excoriated the president’s economic boasting, saying that “manufacturing jobs continue to be shipped overseas,” and highlighted the prohibitively high cost of the American health care system, which, as Vox’s Ian Millhiser argues, was the subject of perhaps the president’s “biggest lie” over the course of a sprawling, showmanship-laden address well over an hour in duration.

Correction: This article originally misquoted Rep. Ayanna Pressley as describing President Donald Trump’s State of the Union address as a “scam.” Pressley referred to the speech as a “sham” on Twitter.