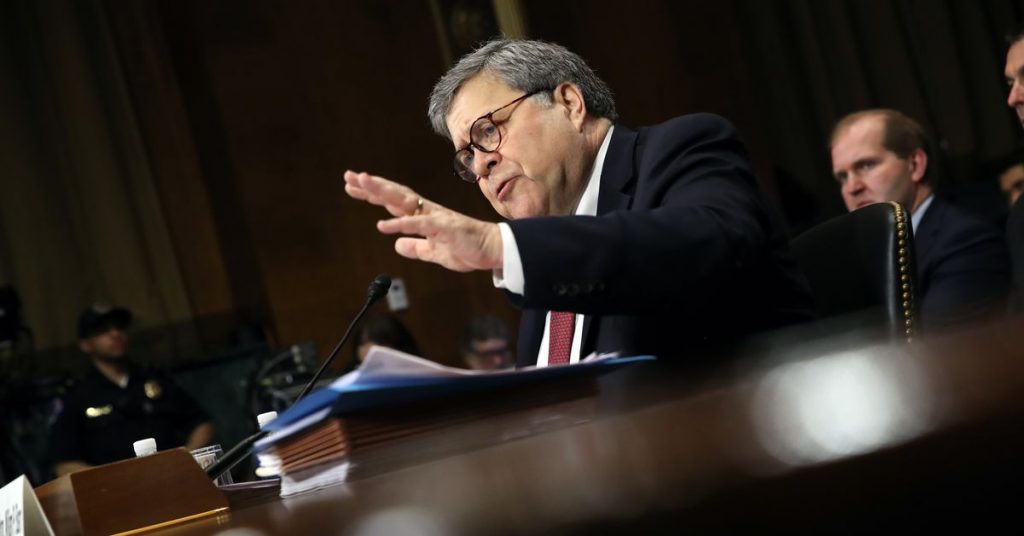 Attorney General William Barr defended his handling of the Mueller report at a tense Senate hearing on Wednesday that highlighted the stark partisan divisions between Republicans and Democrats over the special counsel’s conclusions.

Barr started off his testimony on the defensive, after a letter Mueller wrote to Barr on March 27 was made public Tuesday evening. In that note, Mueller explicitly criticized the letter Barr sent to Congress and released to the public outlining the “principal conclusions” of the investigation.

Mueller said Barr’s summary “did not fully capture the context, nature, and substance of this Office’s work and conclusions,” and the special counsel urged Barr to release executive summaries he and his team had prepared to clear up public confusions about the investigation.

Barr did not do so, and he defended that decision when pressed by Democratic senators, who also pressed him on how he concluded President Donald Trump did not obstruct justice.

Republicans, on the whole, tried to sow more doubts about the origins of the Russia investigation and pushed Barr to look into concerns about FBI overreach in the investigation.

The partisan back-and-forth obscured the actual findings Mueller offered on Russian interference in the 2016 election and on his analysis of Trump’s attempts to obstruct his probe. The hearing also raised more questions about Barr’s role in steering the investigation in its final months — and made it extremely clear that Mueller must testify.

Mueller’s letter to Barr gave Democrats another line of questioning to explore at the hearing.

The letter has served as the clearest signal yet that Mueller was dissatisfied with Barr’s initial public statements about the Russia investigation on March 24 — and that Mueller had a remedy: the release of executive summaries, prepared by the special counsel and his team, for public consumption.

In his testimony, Barr claimed he told Mueller he “was not in the business of putting out periodic summaries because a summary would start a whole public debate.” Instead, he said he wanted to work with Mueller’s team to put out the full report as soon as possible.

Barr’s initial March 24 letter summarized and selectively quoted from Mueller’s report. So Barr’s defense — essentially, “I just didn’t want to put incomplete information out there” — is rather weak. Senators tried to probe Barr on this point, but their efforts often got lost in semantics, as they debated with the attorney general whether Barr’s letter constituted a summary or just “top-line” conclusions, and whether it was the press or Barr who misinterpreted Mueller’s findings.

All of this missed the point: Barr could have put out more thorough information, and declined to do so. This decision let loose the narrative that the special counsel did not establish coordination or conspiracy between Trump and Russia, and that the president, therefore, could not have obstructed justice — allowing the president to victoriously declare “total exoneration” for nearly a month. Mueller’s report is far more nuanced, complex, and damning than Barr suggested.

Barr also confirmed he talked to Mueller after receiving the special counsel’s letter — which he at one point described as “a bit snitty” — and he told the committee Mueller “felt that what was inaccurate was the press coverage and what they were interpreting the March 24 letter to say.”

AG Barr on his phone call with special counsel Robert Mueller after he released four-page summary: “I asked him if he was suggesting that the March 24 letter was inaccurate, and he said, no, but that the press reporting had been inaccurate.” https://t.co/EwrguiboDK pic.twitter.com/YPwrOrcpfU

While the attorney general said others, including Deputy Attorney General Rod Rosenstein, were present for that conversation on speaker phone, he told Sen. Richard Blumenthal (D-CT) that he would not make public his notes on that chat.

This is pretty remarkable, considering Barr had previously testified to Congress on April 10 that he didn’t know whether Mueller supported his publicly stated conclusions about the report.

There seems to be a lot more to this story — or maybe not. But unless Mueller speaks publicly, Barr’s narrative will, once again, prevail.

For Barr, it came down to one key line of reasoning: Most of the actions Trump took related to his authority as president. And while some actions, such as firing former FBI Director James Comey, might be interpreted as signaling corrupt intent, Barr argued that would be an incorrect interpretation because Trump was “falsely accused.”

“That is important because most of the obstruction claims that are being made here, or episodes, do involve the exercise of the president’s constitutional authority, and we now know that he was being falsely accused,” Barr testified.

Wild from Barr: If the president feels a proceeding is unfounded, “the president does not have to sit there constitutionally and allow it to run its course. The president could terminate the proceeding and it would not be a corrupt intent because he was being falsely accused.” pic.twitter.com/SMpiIXia92

But Barr didn’t make it clear what he was referring to when it came to “false accusations” against Trump. Mueller did not establish coordination or conspiracy between Trump and Russian officials — those underlying crimes — but he did examine ties to the Trump campaign, many of which were suspicious, even if they weren’t criminal.

Mueller, of course, did not come to a conclusion on obstruction of justice — but Barr did, allowing the president to declare he had been exonerated by the report. In his testimony, Barr once again helped shield the president from scrutiny.

Republicans —not all, but many of them — wanted to shift the focus of the session to the origins of the Trump-Russia investigation, and worked to imply that the FBI may have overstepped or illegally spied Trump and his campaign.

Republicans have long taken issue with the surveillance of former Trump campaign aide Carter Page. The FBI had a Foreign Intelligence Surveillance Act (FISA) warrant out on Page, who had traveled to Moscow in the summer of 2016. Page was also mentioned in the infamous Steele dossier, which alleged that Page met with Russian operatives in July 2016. Those claims in the Steele dossier have not been proven. But the FBI used the allegations in the dossier as part — but not the only justification — of an application for a FISA warrant to surveil Page.

Opponents of the Mueller investigation, including the president, have long pointed to this FISA warrant on Page as an example of FBI overreach.

The attorney general did little to tamp down these accusations. Barr testified in April that he believes “spying on a political campaign” to be a big deal, and said he reviewed “both the genesis and the conduct of intelligence activities directed at the Trump campaign during 2016.” He promised again on Wednesday to do so.

There were a few instances in which Barr discussed intelligence gathering on the Trump campaign and his department’s investigation into those efforts. One notable example was this exchange with Sen. Mike Lee (R-UT):

Lee: You previously said you think it’s possible that the Federal Bureau of Investigation improperly spied on the Trump [campaign.] I assume that’s a reference to the FISA warrant for Carter Page. Is that what you have in mind? Are there other circumstances you have in mind there?

Barr: One of the things I want to look — there are people — many people seem to assume that the only intelligence collection that occurred was a single confidential informant and a FISA warrant. I would like to find out whether that is, in fact, true. It strikes me as a fairly anemic effort if that was the counterintelligence effort designed to stop the threat as it’s being represented.

Barr suggests that the FBI’s counterintelligence investigation into the Trump campaign did not in fact begin with Papadopoulos bragging about having knowledge of Russian hacks pic.twitter.com/xBqpcTYym5

This is a remarkable statement: Barr appears to be suggesting that he believes the FBI’s surveillance went beyond Page. However, when Lee asked Barr if there was any evidence that other Trump officials were under surveillance, Barr said he didn’t know.

“These are the things that I need to look at. And I have to say that as I’ve said before, you know, the extent that there was any overreach,” Barr said. “I believe it was some — a few people in the upper echelons of the bureau and perhaps the department.”

By seeming to lend credence to the idea there was some impropriety in the way the FBI handled its surveillance of Page, Barr assisted in advancing the GOP’s counter-programming to the Mueller report.

Everyone agreed Russia interfered in the 2016 election, but not on what to do about it

There were a few glimmers of bipartisan agreement at the Barr hearing. The most substantial came when Democrats and Republicans (and Barr) agreed that Russia interfered in the 2016 election, and that it would likely attempt to do so again.

Senators from both parties also questioned the nature of Russian outreach to the Trump campaign, and what would happen if it were repeated in 2020.

Ben Sasse (R-NE) pressed Barr on this, specifically on whether the laws governing foreigners’ involvement in US campaign are sufficient. Barr didn’t have a clear answer, claiming it was a “slippery area” and hard to talk about without a specific scenario.

Barr seems reluctant to even admit that having people working in US political campaign who are on the payrolls of foreign governments is bad pic.twitter.com/KGpPz7VvrR

Sen. Chris Coons (D-DE) offered one, asking Barr what 2020 candidates should do if “a foreign adversary offers a presidential candidate dirt on a competitor in 2020.” He continued, “Do you agree with me the campaign should immediately contact the FBI?”

OMG — Barr hesitates before acknowledging that presidential campaigns that are offered dirt from hostile foreign governments should probably contact the FBI pic.twitter.com/eqFkHjmBJj

This speaks to the uncomfortable reality of the Mueller report: The special counsel did not establish coordination or conspiracy, but did make explicit that there were a lot of ties between the Trump campaign and Russian officials. Mueller’s report shows that the campaign was receptive to Russia’s overtures — as in the Trump Tower meeting in June 2016, for example — even though they didn’t pan out.

Senators wanted to know what happens if a foreign government interferes in the 2020 election, and Barr’s answers suggested that conditions still exist that would allow this scenario to repeat in 2020 election — with unclear repercussions for those involved.

Barr testified for hours on Wednesday, but Congress or the public still does not know what Mueller himself thinks.

The special counsel (and for the most part, his team, with one notable exception) has been conspicuously press-averse throughout the entire investigation and during the release of the report. Now it’s clear that Mueller took issue with Barr’s actions after receiving the report.

Because Barr continues to speak as Mueller remains silent, the attorney general ultimately gets to characterize Mueller’s intentions and the conclusions of an investigation he oversaw for barely two months.

Mueller, a respected former FBI director, may have wanted to avoid the partisan fray. But if, as Mueller said in his March 27 letter to Barr, the point of a special counsel is “to assure full public confidence in the outcome of the investigations,” then it’s time for Mueller to do so, and testify.