A Capital Under Siege

And what else you need to know today. …

Want to get The Morning by email? Here’s the sign-up.

descend on Washington to watch a newly elected president take the oath of office. A departing president signals his respect for the country by celebrating the new one, even when that departing president is disappointed by the election’s outcome — as was the case with Barack Obama, George W. Bush, Bill Clinton, George H.W. Bush and others.

“I grew up in the Washington area, and inaugurations have always been a time of hope and fresh beginnings regardless of party,” Peter Baker, The Times’s chief White House correspondent, told me.

But when American democracy is under siege, an inauguration can have a very different feel. That was true in 1945, when the U.S. was fighting fascism in World War II, and Franklin D. Roosevelt’s fourth inauguration was a spartan affair. It was true in 1861, when the country was on the verge of war and Abraham Lincoln was the target of an assassination plot. It was true again four years later, when smallpox was raging and the Civil War was nearing its end.

And it will be true today — when mismanagement has left the U.S. coping with the world’s worst Covid-19 toll and when law enforcement agencies are warning of potential violence by President Trump’s supporters. 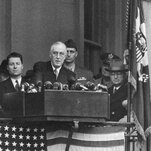