A new biography traces the influence he wielded as a writer and the pain he endured for his sexuality in an unwelcoming world. …

Fifty years ago, this is how the foremost American food authority described his favorite menu for a holiday open house:

“I put out a big board of various slicing sausages — salami, Polish sausage, whatever I find in the market that looks good — and an assortment of mustards. I also like to have another board of cheeses: Swiss Gruyère, a fine Cheddar and maybe a Brie. And with the cheeses, I serve thinly sliced rye bread and crackers of some kind and a bowl of fruit.”

In other words: James Beard, who died in 1985 at age 81, was a master of the charcuterie board long before it became a staple on Instagram and Pinterest — and even before those platforms’ founders were born.

Discovering seeds of the present in the past happens again and again when revisiting Beard’s body of work, which I did this fall in anticipation of the first new biography of him in 30 years: “The Man Who Ate Too Much,” by John Birdsall, published in October by W.W. Norton. For the first time, Mr. Birdsall brings both scholarly research and a queer lens to Beard’s life, braiding the strands of privilege and pain, performance and anxiety, into an entirely new story.

Mr. Birdsall, a writer and former chef whose work focuses on queer influence in American food and homophobia in the culinary world. “I wanted to understand that — the personality or psychology of 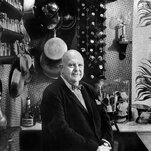