Mario Draghi presented his cabinet to Italy’s president on Friday, all but assuring that he will become prime minister at a precarious moment for the country and the European Union. …

ROME — Mario Draghi, a giant of Europe largely credited with saving the euro, formally presented a broad unity government to Italy’s president on Friday, all but assuring that he will become prime minister at a precarious moment when the prospect of a more closely bound European Union hinges on Italy’s success.

Mr. Draghi, who is expected to easily surpass the formalities of confidence votes in Parliament next week, will be tasked with guiding Italy through a devastating and unpredictable pandemic.

But he also must secure its future by wisely and efficiently spending a once-in-a-generation relief package financed by debt raised for the first time collectively by all E.U. countries. If he succeeds, he could set a precedent. If he fails, E.U. countries are less likely to approve such a package again.

Mr. Draghi arrives in a position of rare clout in Italian politics.

A recognized statesman in Europe, he had the opposite problem of his predecessors who struggled to cobble together support to form a government. Mr. Draghi spent weeks trying to find room on his bandwagon for an ideological hodgepodge of political parties.

Pro-Europe liberals and former communists joined far-right populists who had stunningly changed their tune, anti-establishment forces desperate to be part of his establishment and a free-market media mogul who hailed the return of normalcy.

“I will read the composition of the government,” Mr. Draghi said Friday night in a terse statement that contrasted with the verbosity of his predecessor and underlined his strictly-business reputation and the urgency of his mandate.

In a previous visit to the president’s Quirinal Palace, Mr. Draghi talked about the “extraordinary resources of the European 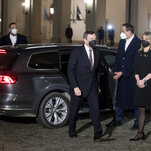