A New Day in Haiti? Many Haitians Have Their Doubts.

Tuesday was a day for paying tribute to its assassinated president, and installing new leaders. But to many struggling Haitians, they looked more than a little familiar. …

PORT-AU-PRINCE, Haiti — Gerard Lovius falls asleep at night on the floor of an empty classroom to the sound of gunfire. He and his shellshocked neighbors started living there a month ago, after gang members invaded his home, sending his terrified wife and three children running to the streets and leaving him with nothing: no money, no possessions, not even a cellphone.

On Tuesday morning, Mr. Lovius was back at his job as a street cleaner, tidying up before the day’s stately memorial for Haiti’s assassinated leader in the Champs de Mars, the capital’s main square. President Jovenel Moïse would soon be laid to rest, and the sparring members of his government had just reached a truce, vowing to lead the country anew.

But there was little peace in Mr. Lovius’s life. “We have hope only in God,” he said, hauling a wheelbarrow of trash up the street.

the political truce a new chapter, a historic turning of the page that, in the words of the interim prime minister, shows “that we can actually work together, even if we are different, even if we have different world outlooks.”

But for many in country, it does not seem like a change. The list of cabinet ministers published in the government’s official gazette featured several familiar names from Mr. Moïse’s governing party, including the new prime minister and the new foreign minister, both of whom had been angling to take over since the president was killed.

“This is a provocation,” Pierre Espérance, the executive director of the Haitian National Human Rights Defense Network, said of 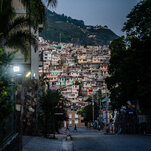