The Ghani administration and the Taliban are fighting a public-relations battle, with the government taking more drastic measures to control the flow of information. …

KABUL, Afghanistan — After Ahmad Jawad Hijri saw the wounded children in the hospital and learned of the Afghan airstrike that put them there, killing nine others around their age in northern Afghanistan, he never expected that his response would land him in jail.

But Mr. Hijri, then the spokesman for the governor of Takhar Province, was arrested, imprisoned for three days and then fired after telling the news media what had happened — a standard part of his role which he had performed many times before. Top officials in Kabul insisted that only Taliban fighters had been killed in the strike, not children, and that anyone who said otherwise was to be prosecuted.

“At the hospital I saw the wounded children,” Mr. Hijri said. “I did not make a mistake.”

The war in Afghanistan has long been one of competing narratives. But the government’s response to the Oct. 22 strike in Takhar Province signaled a shift in tactics by President Ashraf Ghani’s administration: an overt declaration of its willingness to suppress and deny information on the deaths of innocent people. It also highlighted the changing political landscape as peace negotiations continue in Qatar and the Taliban move to take advantage of the attention they are attracting on the world stage.

The news briefings that defined the early years of the war as both sides jockeyed to win Afghan hearts and minds have nearly ceased. That leaves its main players — the United States, the Taliban and the government — all testing different communication strategies to achieve their desired ends.

But with the Americans set to possibly withdraw from the country in the coming months, the Afghan government — inundated by 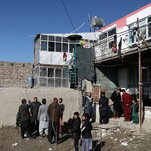