For Armenians uprooted from their homes, and for Azerbaijanis returning to uninhabitable towns, “It’s going to be very hard to forgive.” …

For Armenians uprooted from their homes, and for Azerbaijanis returning to uninhabitable towns, “It’s going to be very hard to forgive.”

By Carlotta Gall and Anton Troianovski

FIZULI, Azerbaijan — Crossing into territory that Azerbaijan recently recaptured from Armenia is a journey into a devastated wasteland reminiscent of a World War I battlefield. The road passes miles of abandoned trenches and bunkers, and village after village of ruins, the white stones of homesteads scattered, every movable item — roofs, doors, window frames — picked clean.

The absence of life is eerie.

Wrecked Armenian tanks and armor lay beside the road and in hilltop positions, testament to the devastating power of Azerbaijani drones. Abandoned uniforms and equipment signal a panicked retreat by Armenian soldiers as Azerbaijani forces seized control of the district in early November.

Decades after the surrounding territory was seized by Armenia, the town of Fizuli, once a prosperous agricultural settlement of some 30,000 people, has become a forest, its ruined public buildings smothered by trees and undergrowth. The fate of the larger town of Aghdam, further north, is even more stark, its buildings split open to the skies on a desiccated plain, its main bridge destroyed.

“It’s going to be very hard for me to forgive them,” Elmaddin Safarov, 47, an army veteran, said of the Armenians, as he gazed at the wreckage of Aghdam, where 17 of his relatives died.

The conflict over Nagorno-Karabakh, an ethnically Armenian enclave within Azerbaijan, has been one of the world’s most intractable territorial 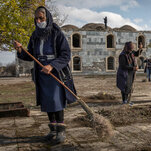