Amazon is opening a supermarket with no cashiers. Is Whole Foods next? 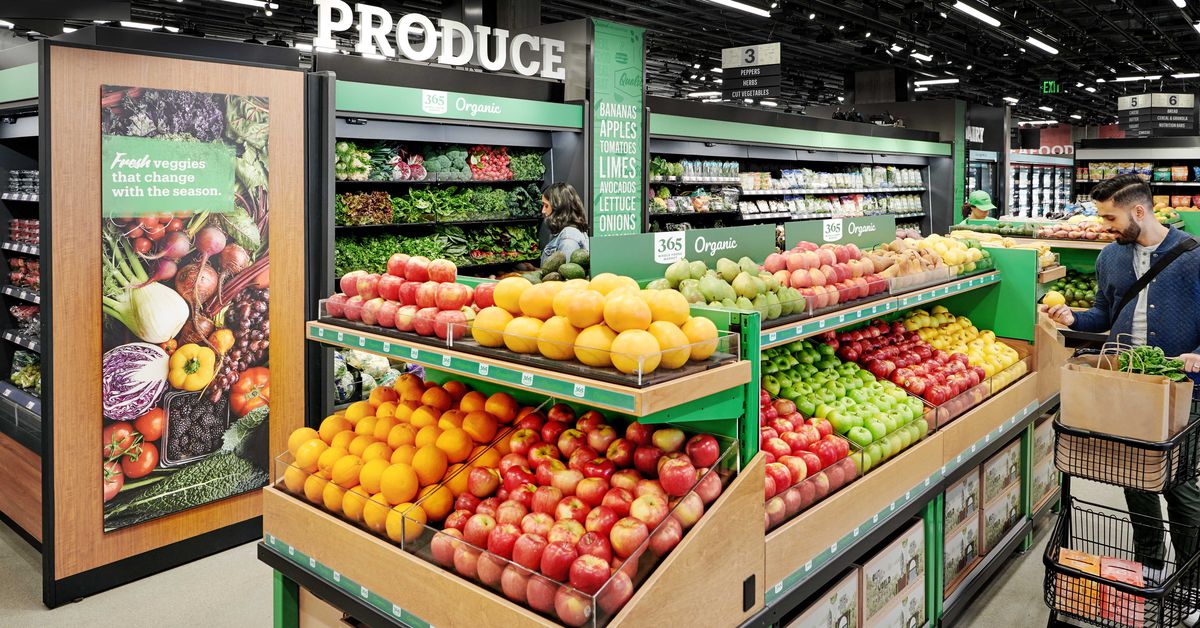 Two years ago, Amazon introduced the idea of high-tech, cashierless shopping with a store that was a cross between a 7-Eleven and a Pret A Manger sandwich shop. Now, Amazon is bringing the same concept to a full-size supermarket.

On Tuesday, Amazon will open the doors to a 10,000-square-foot Amazon Go Grocery store in Seattle’s Capitol Hill neighborhood, less than a mile from the tech giant’s downtown Seattle headquarters. It’ll be stocked with 5,000 different products — from organic fruit to grass-fed beef — and outfitted with cameras, sensors, and computer vision that eliminate the need for shoppers to fork over cash or plastic before walking out the door with their groceries.

The new store, which is the first of its kind in the US, highlights Amazon’s unsated appetite for gobbling up market share in the $900 billion US grocery industry, even after spending nearly $14 billion in 2017 to acquire Whole Foods and making same-day grocery delivery a free perk for Prime members last year. At the same time, the expansion of the cashierless store concept raises the question of when — not if — the technology will be ready for installation in Whole Foods stores, and what might happen to the chain’s thousands of cashiers when it is.

“There’s no plans to put this in a Whole Foods, for now,” Amazon Go’s vice president Dilip Kumar told Recode on a tour of the new store on Monday. “For now, what we are focused on is this concept and see what customers think of it — [and] go from there.”

“You would understand why that’s an obvious question,” I told him.

Kumar laughed. “You would understand why I can’t comment on that,” he responded.

Twenty-five years ago, Amazon was simply an online purveyor of books making a radical bet on what the future of consumerism might look like. Just over two decades later, Jeff Bezos’s company has grown into the largest online retailer in the US (it’s now eight times the size of the No. 2 competitor); it’s a mainstream provider of entertainment through its Prime Video offering; and it’s the largest cloud computing company in the world.

But in Amazon speak, “it’s always Day 1,” which means the company is just scratching the surface of what it might accomplish. In the case of the grocery industry, though, Amazon’s grocery delivery service languished in business purgatory for a decade, unable to crack the code on the right economic model that would both be affordable to a mass customer base but lucrative enough to sustain the business. Still, the food and beverage category is too large for a company with Amazon’s ambitions to ignore, so first came the Whole Foods purchase and then the launch of Amazon Go stores.

Since the opening of the first Amazon Go store on the ground floor of the company’s downtown Seattle headquarters in January 2018, Amazon has added more than 20 new locations, with eight in New York City, six in Chicago, and four each in San Francisco and Seattle. Those stores sell breakfast items, sandwiches, salads, and snacks, and they are aimed at enticing busy working professionals in corporate districts on their way to and from work, and on lunch breaks. Many feature both local and national food and beverage brands, including some of Amazon’s own labels, like Happy Belly and Whole Foods’ 365 Everyday Value brands. (The new Amazon Go Grocery store also sells a cross section of local, mainstream, and private-label brands.)

Over time, Amazon’s online dominance has solidified a virtuous cycle, where new merchants with new products attract new shopping, and Amazon reaps the benefits of sales as well as shopper and seller data to help hone its retail the machine. In the case of the Amazon Go brick-and-mortar stores, Amazon gains insights into its customers’ shopping behavior that it can’t already glean from shopping data on its website. Customers scan an Amazon Go app at a turnstile upon entering and can simply exit without checking out when they are done. Shoppers who want to pay in cash can ask a store associate to swipe them in, an addition to the original idea that was implemented after some municipalities banned cashless stores.

The original Amazon Go stores have received high marks from shoppers in online reviews, but their technology infrastructure is expensive to build out. That fuels speculation from industry analysts that Amazon Go might need to expand into a format where each shopper is spending more per visit. In fact, the original prototype for Amazon Go back in 2015 was a 15,000-square-foot supermarket that Jeff Bezos reportedly vetoed after a visit, according to a Bloomberg News report. “There were specialty counters where Amazon employees posing as baristas, butchers, and cheesemongers took orders and added items to Bezos’ imaginary bill,” Bloomberg reported. But Bezos didn’t like that that customers would have to wait for their meat or cheese to be weighed and added to their bill when the whole point of the store was to eliminate wasted time at checkout.

Five years later, the supermarket concept is finally launching, but at two-thirds of the prototype size and with a simple format more reminiscent of a Trader Joe’s than a Stop & Shop, Kroger, Walmart, or even Whole Foods. There’s no deli counter, butcher, or bakery, likely because of the additional friction they’d add to a shopping experience that Amazon and Bezos imagined would be quicker than that of competing stores.

Produce items are sold by the unit or bundle rather than by weight, so that the cameras and computer can handle the price computations. But building technology advanced enough to accurately identify and associate unpackaged items with a specific shopper still proved a substantial hurdle.

Shoppers typically spend more time picking up, placing down, and just handling produce than they do with packaged items, which adds complexity to the computer identification process. And that’s not even taking into account the physical differences from one pear to another. “So how do you take into account color and shape and other characteristics … to just be able to associate that to the right customer account?” Amazon’s Kumar asked rhetorically.

The new store will employ workers who unpack inventory behind the scenes and restock shelves and produce bins. Other staff will greet shoppers at the entrance and check IDs in a section where beer, wine, and liquor is sold. Amazon wouldn’t disclose how many people work on any given shift, but the company said it hired “several dozen associates” to work at the store. Amazon argues that Amazon Go stores aren’t eliminating jobs, but instead are shifting worker roles to different kinds of labor.

Still, the lack of cashiers — of which there are more than 3.5 million in the US — is notable when you consider that Whole Foods has around 500 stores. Whole Foods stores are typically two to five times the size of the new Amazon Go Grocery store, which means that even if it is successful, there’s no guarantee that the technology is good or cheap enough to be transplanted into the organic grocery store chain anytime soon. But when the tech is further developed, it would be surprising if Amazon doesn’t bring it to Whole Foods, especially if customers’ behavior signals they’d want it. And then, the cashier question is one Amazon will face again.