Andrés Manuel López Obrador has scoffed at precautions to stop the spread of the coronavirus. Now he has it. …

Mexico’s president, Andrés Manuel López Obrador, said Sunday that he had contracted the coronavirus and was undergoing “medical treatment” for what he described as mild symptoms.

Mr. López Obrador, writing on Twitter, said he would continue to carry out his official duties, including holding a call with President Vladimir V. Putin of Russia that is set for Monday.

“As always, I am optimistic,” he said.

The Mexican leader has consistently played down the pandemic, questioning the value of wearing masks and refusing to wear one himself in most public appearances.

On Friday, he posted a photo of himself indoors, again without a mask, conducting a call with President Biden. He was accompanied by Marcelo Ebrard, the foreign minister, and Alfonso Romo, a former top aide — and neither was wearing a mask. And on Saturday, the president met with local business leaders in Monterrey.

still sounding dismissive. He said that having a clean conscience would help fight off the virus. “No lying, no stealing, no betraying, that helps a lot to not get coronavirus,” he told reporters.

And for months, the president has repeatedly insisted that the end of the pandemic’s devastation was just around the corner.

“The worst is ending,” he said this month, as deaths surged. “We are coming out of it.”

In the spring, <a 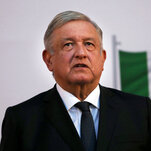