KABUL, Afghanistan — It started as a dispute between boys: Naseebullah Barakzai, 13, was irked when a neighbor boy stole fruit and ripped limbs from his family’s pomegranate tree, and he shoved the younger boy to the ground, relatives say.

Just two days later, Naseebullah was dead, and his village, in the southern Afghan province of Kandahar, was in an uproar. His family and other residents accuse an influential police checkpoint commander of taking the other boy’s side and abducting and raping Naseebullah, fatally injuring him.

It is the kind of sexual assault that has run rampant within the Afghan security forces. And in other forms, child abuse has become ritualized: One practice, in which powerful men molest young boys and force them to dress and dance in girls’ clothing, is widely known as bacha bazi, or boy play.

Poor families have suffered for years as commanders and their men have preyed on them, part of a broader culture of corruption in the security forces that led to efforts to reform the military and police. But officials have been reluctant to acknowledge, much less confront, the endemic issue of sexual abuse of children — including bacha bazi and minors forced into marriage — though those practices have been officially outlawed.

In the case of Naseebullah, though, public outrage appears to be forcing a rare reckoning.

Naseebullah’s family, backed by a throng of elders from the village of Karezak, marched into the offices of Kandahar’s governor, Hayatullah Hayat, to demand justice and the arrest of the police commander, First Lt. Mullah Roozi Khan, last month. And it worked: The government quickly arrested Lieutenant Khan and six of his officers, 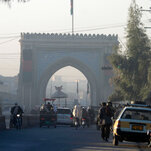