Arts Bailout in U.K. Buys Time, but No Peace of Mind

In Liverpool, England, whose tourist trade is built on culture, more than 40 venues received money from a $2 billion fund. That life support lasts until April. …

LIVERPOOL, England — One recent afternoon, Liam Naughton was standing in the main room of the Invisible Wind Factory, a vast music venue and arts space he runs in a formerly industrial area of Liverpool, which has been largely shuttered since March.

“We could put a roller rink in here,” he said, excitedly. “The idea is people will be skating around while hot bands are playing.” Marshals could enforce social distancing, he added.

Mr. Naughton’s head was full of such wild ideas because of a sudden change in fortune. At the start of October, he assumed he would have to close down the business entirely and lay off its 60 staff members, he said. Then, on Oct. 12, Britain’s government gave him $300,000 from a $2 billion bailout fund for arts organizations in England to stave off closure.

“It was such a relief,” he said. “All we needed was a little injection to be back in the game.”

There was just one problem, he added: What happens if there’s no vaccine by the time the money runs out? It is impossible for venues like his to make a profit if they have to restrict numbers and enforce social distancing, he said.

called it “a powerful message about the centrality of the arts in a modern democracy.”) 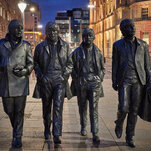