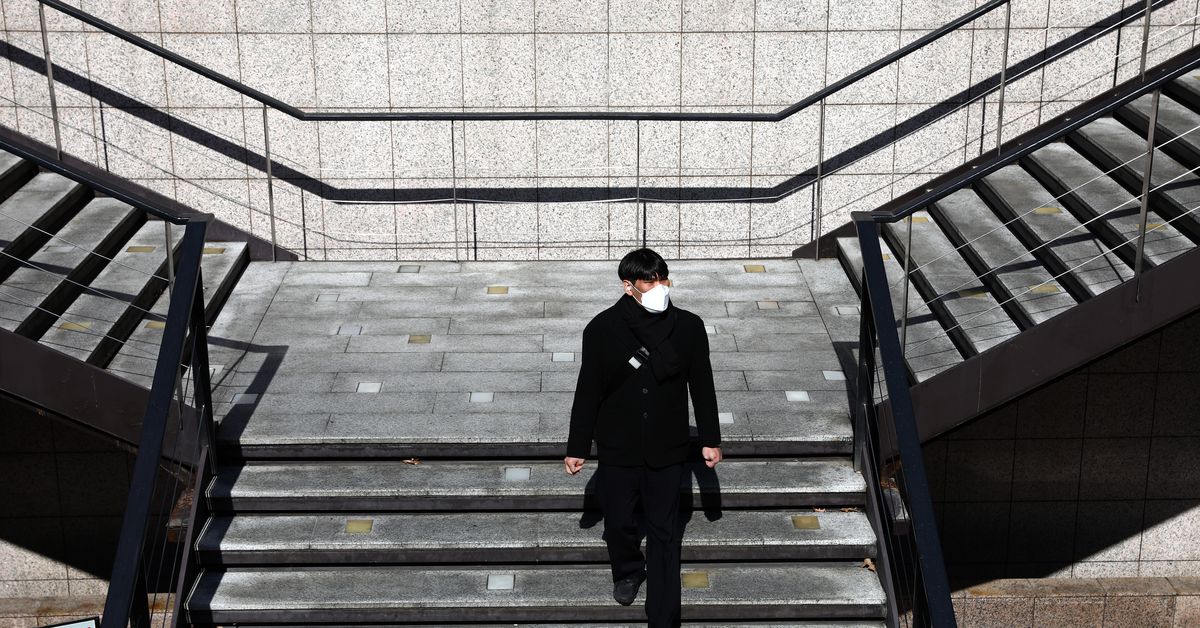 In response to growing concerns about the spread of Covid-19 — the disease caused by the novel coronavirus first observed in Wuhan, China — in South Korea, President Moon Jae-in has raised the country’s threat alert level to the highest of its four levels.

The country is currently struggling to stop the rapid spread of the novel virus, and has the second largest number of confirmed cases in the world, 602 (not counting the passengers of the Diamond Princess cruise ship docked on the shores of Japan). In the span of less than a week, the number of confirmed South Korean cases has jumped more than tenfold, six people have died, and over 8,000 people considered to be at risk of infection are still undergoing testing.

The last time the country raised its virus threat level to four was in 2009, when a novel influenza outbreak killed more than 260 people.

By raising the threat level, the president has given the government the ability to take drastic measures: officials can now restrict public transportation, flights to and from South Korea, bar tourists, lock down cities, and close schools. None of these measures have been implemented as of yet, but Moon said he will not shy away from doing whatever it takes to contain the Covid-19.

“We are faced with a watershed moment in the case of the coronavirus,” the president said, according to The New York Times. “The coming few days will be a critical time for us. This will be a momentous time when the central government, local governments, and the whole people must wage an all-out, concerted response to the problem.”

Health officials point to a woman known as patient no. 31, a resident of the southern city of Daegu and a devout adherent of the controversial religious group the Shincheonji Church of Jesus, as the probable origin of the recent massive uptick in confirmed cases.

The 61-year-old woman first checked in to a hospital following a small car accident. On the fourth day of her stay, she developed a fever, but refused to get checked for the virus because she hadn’t traveled abroad or been in contact with anyone contaminated. She was finally tested on Monday, and on Tuesday she received positive results. Up until that point, she had slipped out of the hospital at least four times to attend services that attracted up to 1,000 people.

Even more concerning was the alleged response of the church: church members reportedly received social media messages that encouraged them to continue evangelical work in small groups and to deny their affiliation to the church if public health officials asked.

Church leadership, however, has denied being behind these messages and said they’ve punished the member who sent them. On Sunday, the group posted a video to their YouTube channel promoting their cooperation with the government: The video claims that not only have they encouraged their membership of over 150,000 people to limit contact with other people, but they’ve also given officials a list of about 9,000 names affiliated with their Daegu branch, according to Shincheonji spokesperson Kim Simon.

The church also used the video as an opportunity to address what it referred to as unfair aggression toward church members, and claim that they are the “biggest victims of a virus that originated in China.”

“We continue to see reports that suggest Shincheonji is hiding something,” Kim said. “We urge you to stop the hatred against Shincheonji followers.”

South Korea isn’t the only country overwhelmed by a sudden outbreak in confirmed cases. As of Sunday, there are over 78,000 cases of Covid-19 in at least 29 countries,

Iran, which did not have any confirmed cases until last Thursday, now has 43 confirmed cases and a death toll of eight, the highest death toll outside of China. Even more concerning is that cases linked to Iran have already popped up in Lebanon and Canada. As a result, the city of Tehran has closed down all bistros and water fountains as a preemptive response, Al Jazeera reported.

Meanwhile, Northern Italy has also been hit hard: out of the total 132 cases, 89 come from the Lombardy region, which includes financial hub Milan. It’s now the biggest hub of Covid-19 outbreaks outside of Asia, and two people have died from the disease.

It’s not that countries aren’t taking drastic measures to stop the spread of the disease. On Saturday, Israel denied the entry of 130 South Koreans to Tel Aviv, and sent them back home on the same flight (earlier, South Korea informed Israel that a group of Korean tourists had tested positive after returning home from Israel). And the United States has raised travel advisory for South Korea and Japan from Level 1 to Level 2, which calls for increased caution but not a travel ban.

At this point, however, the spread of the virus might be inevitable. As Vox’s Julia Belluz reports, Covid-19 is starting to look more and more like a pandemic (the spread of a new disease across the world) — and might even already be in one. The rapid rise of cases outside of China is a new development, and health officials are saying that our responses should now evolve as well, she wrote:

Public health experts said countries need to move from trying to contain the virus to mitigating its harm — reducing the spread, and caring for the very sick. “It is beyond time,” said Jennifer Nuzzo, an infectious disease expert and senior scholar at the Johns Hopkins Center for Health Security. This means hospitals need to be ready with Covid-19 protocols, health care workers need to be protected with access to protective equipment such as face masks, and countries need plans for maintaining supply chains and carrying on with travel and trade.

To be clear, a pandemic refers to how widely a disease spreads, not how many people die from the virus. It is still unclear how deadly the Covid-19 virus is, although a report from the China’s CDC found it to be less lethal than SARS. Nonetheless, the sheer number of people that need treatment could overwhelm any country’s health care system, leading to a shortage of hospital beds or medical equipment for those suffering from other maladies. Although the US only has 35 confirmed Covid-19 cases so far, South Korea, Italy, and Iran are case examples of why it is necessary to stay prepared.