As antigovernment protesters took to the streets, officials imposed an emergency decree in Bangkok, and gatherings of five or more people were banned. …

BANGKOK — The cream-colored stretch Rolls-Royce limousine crawled past the angry crowds. The queen of Thailand smiled.

But what Queen Suthida Vajiralongkorn Na Ayudhya saw on Wednesday, on a stately road in Bangkok, may have been sobering.

Antigovernment protesters yelled “my taxes!,” referring to their personal contributions to royal coffers. The police held them back but could not hide the demonstrators’ defiant salutes.

For months now, pro-democracy protesters have gathered by the thousands to call for reforms to the monarchy and military, influential institutions that have dominated Thailand’s power structure for decades.

But the royal limousine’s route on Wednesday was the first time that members of the nuclear royal family had gotten such a close look at the faces of Thais who are openly questioning the monarchy’s exalted position in the country. Thailand’s King Maha Vajiralongkorn Bodindradebayavarangkun and some of his immediate family — the queen, who is his fourth wife, and his youngest son, the heir apparent — live most of the year in Germany.

By Thursday morning, Prime Minister Prayuth Chan-ocha of Thailand, a retired general, had ordered riot police to clear the protesters from their rally site near his offices at Government House, where they had camped out overnight calling for his removal.

Officials imposed an emergency decree in Bangkok, and gatherings of five or more people were not permitted. The decree also banned news or online content that “could create fear or intentionally distort information” by compromising national security or damaging peace and order.

The government of Mr. Prayuth, who came to power in a 2014 military coup, was also given purview to declare any area off-limits to potential demonstrators. The 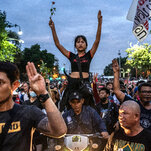