Bangladesh and Parts of India Look to Lockdowns Amid Surges

Some countries in the densely populated region, home to one-quarter of the world’s population, are facing “a storm” of virus infections. …

NEW DELHI — As a new wave of coronavirus infections grips the densely populated region of South Asia, home to a quarter of the world’s population, Bangladesh on Saturday announced a second lockdown and officials in Mumbai, India’s largest city, said they were on the verge of declaring one.

The authorities in Bangladesh said the nation of 165 million people would go into a weeklong lockdown beginning on Monday to curb the spread of the virus. The country shut down for two months starting in March last year.

Bangladesh on Friday registered nearly 7,000 cases in 24 hours, the highest since the spread of the virus in the country last year. The daily death toll has been around 50 for the past week, but what has particularly alarmed officials is the high test positivity rate, with 24 percent of virus tests conducted coming back positive.

Farhad Hossain, Bangladesh’s state minister for public administration, told the local news media that “industries and factories will remain open,” but would operate in shifts and follow strict health protocols. The exceptions appeared to be aimed at reducing the economic impact and avoiding the kind of exodus of laborers that led to a humanitarian crisis in India last year.

sharply in Pakistan, which has struggled to source vaccines for its population, and in India, where a vaccination drive is only now picking up pace — despite the country being home to one of the world’s largest suppliers of vaccines.

Just a few weeks ago, India was a major exporter of the AstraZeneca vaccine, and 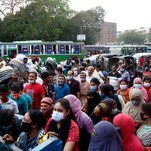