Battered Turkish Economy Puts a Powerful Erdogan to the Test

Turkey’s veteran leader played an aggressive hand abroad, but as the country’s economy plummets, he is feeling ire at home as many Turks struggle to buy food. …

ISTANBUL — Hobbled by restrictions on his tobacco shop, Ozgur Akbas helped organize a demonstration in Istanbul last month to protest what he called unfair rules imposed on merchants during the pandemic.

“There are many friends who have shut down,” he said in an interview. “And some are on the verge of suicide.”

Turks had been grappling with a falling currency and double-digit inflation for two years when the pandemic hit in March, sharply worsening the country’s deep recession. Nine months in, as a second wave of the virus sweeps through Turkey, there are signs that a significant portion of the population is overwhelmed by debt and increasingly going hungry.

MetroPoll Research, a respected polling organization, found in a recent survey that 25 percent of respondents said they could not meet their basic needs. Mr. Akbas said he sees it daily among his customers.

The government admitted that it had been understating the extent of Turkey’s coronavirus outbreak by not recording asymptomatic cases, and new data revealed record infection levels in the country.

The Turkish lira has been battered by a record depreciation — down more than 30 percent against the dollar this year — and foreign exchange reserves have been badly depleted. Along with double-digit inflation, the country now faces a balance of payments crisis, Moody’s Investor Service said recently.

The crisis comes as Mr. Erdogan is about to 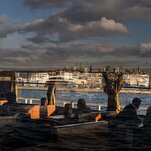