Long before a deadly flood hit two hydroelectric dams, scientists warned repeatedly that such projects were dangerous in a fragile region made more so by global warming. …

NEW DELHI — Long before the floods came, washing away hundreds of people and wiping out newly constructed dams and bridges, the warning signs were clear.

The Himalayas have been warming at an alarming rate for years, melting ice long trapped in glaciers, soil and rocks, elevating the risk of devastating floods and landslides, scientists warned. Nearby populations were vulnerable, they said, and the region’s ecosystem had become too fragile for large development projects.

But the Indian government overrode the objections of experts and the protests of local residents to blast rocks and build hydroelectric power projects in volatile areas like the one in the northern state of Uttarakhand, where disaster struck.

Officials said Monday that bodies of 26 victims had been recovered while the search proceeded for nearly 200 missing people. On Sunday a surge of water and debris went roaring down the steep mountain valleys of the Rishiganga river, erasing everything in its path. Most of the victims were workers on the power projects.

Villagers said the authorities overseeing the expensive development projects had not prepared them for what was to come, giving a false sense of confidence that nothing was going to happen.

“There was no program or training in the village about disaster management by the government,” said Bhawan Singh Rana, head of the Raini village, hit by some of the worst damage. “Our village is on a rock, and we fear that it may slide anytime.”

Security forces focused on one tunnel where they said 30 people were trapped. Food was airdropped to about 13 villages where the roads have been cut off, with roughly 2,500 people trapped. 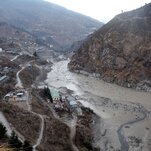