Before Lockdown, This Super Fan Went to 105 Shows in One Season

What has this year been like for the most voracious of culture vultures? A super fan in Chicago lets us into his life without the arts. …

Before the pandemic, he enjoyed playing host. Every winter since 1978, he had convened a series of Wednesday night salons, inviting curators, collectors, artists and art lovers to gather at his apartment. “It’s amazing the conversations that happen around midnight,” he said.

His final night out was March 9, 2020, when he went with friends to Petterino’s Monday Night Live, a cabaret showcase. “It was full throttle,” he said, “as if everyone knew the lockdown was coming.”

A few days later, he dressed up and boarded the bus to watch the symphony perform “Rhapsody in Blue” and “Boléro.” He arrived, found out the performance had been canceled, and went back home. That was March 12.

Minieka never had much use for television. For years he had a hand-me-down black-and-white he used to watch the Oscars and the elections, but when the tubes started leaking, he threw it out. At the start of the pandemic, a friend offered him her old TV — she was upgrading — and he decided it was time to hook up cable and figure out streaming.

He’s bingeing “Downton Abbey,” “The Crown” and “Brideshead Revisited.” He watches the occasional movie. But he has no patience for digital theater. “I just don’t enjoy it,” he says. “I’ve been to the real thing.”

Now he’s had both vaccine doses, and he’s planning to celebrate by seeing a Monet exhibit at the Art Institute. But will he go back to live performance? He’s not sure.

“I’ve kind of gotten used to sitting at home, and not paying for tickets, or spending a couple of nickels to have things streamed,” he said. “And it used to be you had an 8 o’clock curtain, and 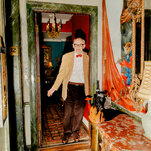