Biden Grants Protections for Venezuelans to Remain in U.S.

Hundreds of thousands of Venezuelans can temporarily continue to live and work in the United States as the administration considers its next steps in the effort to force out Venezuela’s president. …

WASHINGTON — As many as 320,000 Venezuelans living in the United States were given an 18-month reprieve on Monday from the threat of being deported, as the Biden administration sought to highlight how dangerous that country has become under President Nicolás Maduro.

The immigrants also will be allowed to work legally in the United States as part of the temporary protective status the administration issued as it considers the next steps in a yearslong American pressure campaign to force Mr. Maduro from power.

“The living conditions in Venezuela reveal a country in turmoil, unable to protect its own citizens,” Alejandro N. Mayorkas, the homeland security secretary, said in a statement. “It is in times of extraordinary and temporary circumstances like these that the United States steps forward to support eligible Venezuelan nationals already present here, while their home country seeks to right itself out of the current crises.”

Venezuela is mired in one of the world’s worst humanitarian crises under Mr. Maduro, who, through a mix of corruption and neglect, oversaw the decay of the country’s oil infrastructure that had propped up its economy. The United Nations has estimated that up to 94 percent of Venezuela’s population lives in poverty, with millions of people bereft of regular access to water, food and medicine.

Two senior Biden administration officials said the new protections would be offered to those who can prove they are living in the United States as of Monday. The cutoff date aimed to discourage smugglers from enticing other Venezuelans to make the arduous journey to the United States at a time the Biden 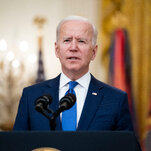