Biden Urges Mexico to Do More to Stop Migration

The Biden administration has been quietly pressing Mexico to ramp up its efforts to limit the flow of migrants, clinging to a Trump policy of relying on southern neighbors to enforce America’s immigration agenda. …

The United States plans to send millions of doses of the AstraZeneca vaccine to Mexico and Canada, the White House said Thursday, a notable step into vaccine diplomacy just as the Biden administration is quietly pressing Mexico to curb the stream of migrants coming to the border.

Jen Psaki, the White House press secretary, said the United States was planning to share 2.5 million doses of the vaccine with Mexico and 1.5 million with Canada, adding that it was “not finalized yet, but that is our aim.”

Tens of millions of doses of the vaccine have been sitting in American manufacturing sites. While their use has already been approved in dozens of countries, including Mexico and Canada, the vaccine has not yet been authorized by American regulators. Ms. Psaki said the shipments to Mexico and Canada would essentially be a loan, with the United States receiving doses of AstraZeneca, or other vaccines, in the future.

The announcement of the vaccine distribution came at a critical time in negotiations with Mexico. President Biden has moved quickly to dismantle some of former President Trump’s signature immigration policies, halting construction of a border wall, stopping the swift expulsion of children at the border and proposing a pathway to citizenship for millions of immigrants in the United States. 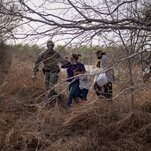