Diplomatic ties with the U.A.E. and Bahrain could create new opportunities. But many say they are loath to undercut the Palestinian cause. …

JERUSALEM — For Israel’s Arab citizens, the normalization deals that Israel struck with the United Arab Emirates and Bahrain will mean newfound freedom to stroll through Dubai’s cavernous malls, take lucrative jobs in Abu Dhabi or solicit investments from wealthy Emiratis or Bahrainis.

The prospects are dazzling. But some Arab citizens of Israel acknowledge misgivings about exploiting opportunities that could benefit them but undercut the Palestinian national cause.

Sajy Khashab, 23, a graduate student in computer science, said he would love to travel to the Persian Gulf, a frequent stop for the travel and food bloggers he follows. “There’s a very small list of Arab countries I can visit,” he said.

But he was unwilling to seize the chance just yet. “I would want to first see that Palestinians in the West Bank at least are OK with this, are in agreement with this,” he said. “Then I would start to think about how I myself can benefit from it.”

diplomatic agreements between Israel and the U.A.E. and Bahrain in Washington last month, the only Arab countries open to Israel’s 1.9 million Arab citizens were Egypt, a popular tourist destination, and Jordan, where thousands have attended college.

For years, the skyscrapers of Dubai, one of the seven emirates in the U.A.E., were omnipresent images in Arab television and social media but largely off limits. Now some people feel an almost uncontrollable urge to see them in person.

“It’s like an American who wants to go visit New York,” said Mohammed Darawshe, a leader of an Israeli group that promotes Jewish-Arab coexistence. “It’s a hub and an icon of culture, and accomplishment, and achievement.” 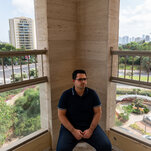