Britain, ravaged by one virus variant, is trying to hunt down another.

Volunteers delivering testing kits in Woking, England, on Tuesday. The authorities are hoping that screening will help to track down a coronavirus variant, first found in South Africa, that has also surfaced in areas of Britain. …

LONDON — Britain, painfully aware of the dangers posed by mutations of the coronavirus after a variant fueled a surge in deaths this winter, has sounded a full-scale alarm over the detection of another variant, this one first registered in South Africa.

In one of the largest concerted testing efforts in the country since the outbreak of the pandemic, the British authorities dispatched mobile units and began testing for 80,000 residents living in areas where the variant had been detected. Free home testing kits left in mailboxes, mobile testing teams going door to door, and new screening sites were among the measures instituted across the affected regions.

As of Monday, health officials had identified 105 cases of the variant in Britain, including in London, with 11 of them not linked to international travel.

Britain, a world leader in genomic surveillance, is well placed to find mutations.

The country has submitted nearly half of the genomes held in a global library run by the nonprofit Global Initiative on Sharing All Influenza Data.

That early alarm system is now being put to the test.

Matt Hancock, the British health secretary, said on Monday: “There’s currently no evidence to suggest this variant is any more severe. But we need to come down on it hard, and we will.” He urged residents in the affected areas to stay at home and to get tested. “This is so important so we can break the chains of transmission of this new variant,” he added.

The plan is for researchers to sequence the entire genome of any coronavirus infections found, looking for mutations. About two 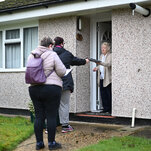