Just a week ago, the government declared Tehreek-e-Labaik Pakistan a terrorist group. But after violent protests spurred by the publication of caricatures in France, the government acquiesced to the Islamist party’s demands. …

Sheikh Rashid Ahmad, Pakistan’s interior minister, said the 11 police officers who were taken hostage during the week of protests had been released. He also said that Tehreek-e-Labaik had pledged to call off a nationwide protest while the government offered the resolution to assuage their demand for the French ambassador to be expelled. Local media also reported that Mr. Rizvi, the party’s leader, had been set free, but it could not be confirmed officially.

“After long negotiations between the government of Pakistan and Tehreek-e-Labaik, it has been agreed that the government will present a resolution on the expulsion of the French ambassador to the National Assembly today,” Mr. Ahmad said in a video message early on Tuesday.

Mr. Ahmad said that, as part of the agreement, any judicial proceedings against the members of the group would also be scrapped. The National Assembly, Pakistan’s legislature, which was not scheduled to meet on Tuesday, announced a special session for the afternoon to take up the expulsion resolution.

At the legislature, lawmakers could not agree on a way forward, and the session was adjourned until Friday when the issue of expelling the French ambassador would be taken up again.

Instead, the session turned into a virtual competition among lawmakers, with many standing to give speeches testifying to their piety and devotion. The speaker of the house repeatedly urged members that the issue was “sensitive” and that the sides shouldn’t politic over it.

According to Pakistan’s Center for Social Justice, a Lahore-based human rights group, at least 1,855 people have been charged under the blasphemy laws between 1987 and February 2021, with 2020 marking the highest number of accusations. (The data does not include the targeted killings of members of sects considered heretic or apostate 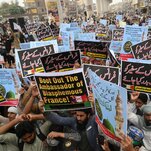