Children’s Screen Time Has Soared in the Pandemic, Alarming Parents and Researchers

“There will be a period of epic withdrawal,” warned one addiction specialist, once schools, activities and social life return to normal. …

Over all, children’s screen time had doubled by May as compared with the same period in the year prior, according to Qustodio, a company that tracks usage on tens of thousands of devices used by children, ages 4 to 15, worldwide. The data showed that usage increased as time passed: In the United States, for instance, children spent, on average, 97 minutes a day on YouTube in March and April, up from 57 minutes in February, and nearly double the use a year prior — with similar trends found in Britain and Spain. The company calls the month-by-month increase “The Covid Effect.”

Children turn to screens because they say they have no alternative activities or entertainment — this is where they hang out with friends and go to school — all while the technology platforms profit by seducing loyalty through tactics like rewards of virtual money or “limited edition” perks for keeping up daily “streaks” of use.

“This has been a gift to them — we’ve given them a captive audience: our children,” said Dr. Dimitri Christakis, director of the Center for Child Health, Behavior and Development at Seattle Children’s Research Institute. The cost will be borne by families, Dr. Christakis said, because increased online use is associated with anxiety, depression, obesity and aggression — “and addiction to the medium itself.”

Crucially, the research shows only associations, which means that heavy internet use does not necessarily cause these problems. What concerns researchers, at a minimum, is that the use of devices is a poor substitute for activities known to be central to health, social and physical development, including physical play and other interactions that help children learn how to confront challenging social situations. 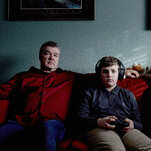