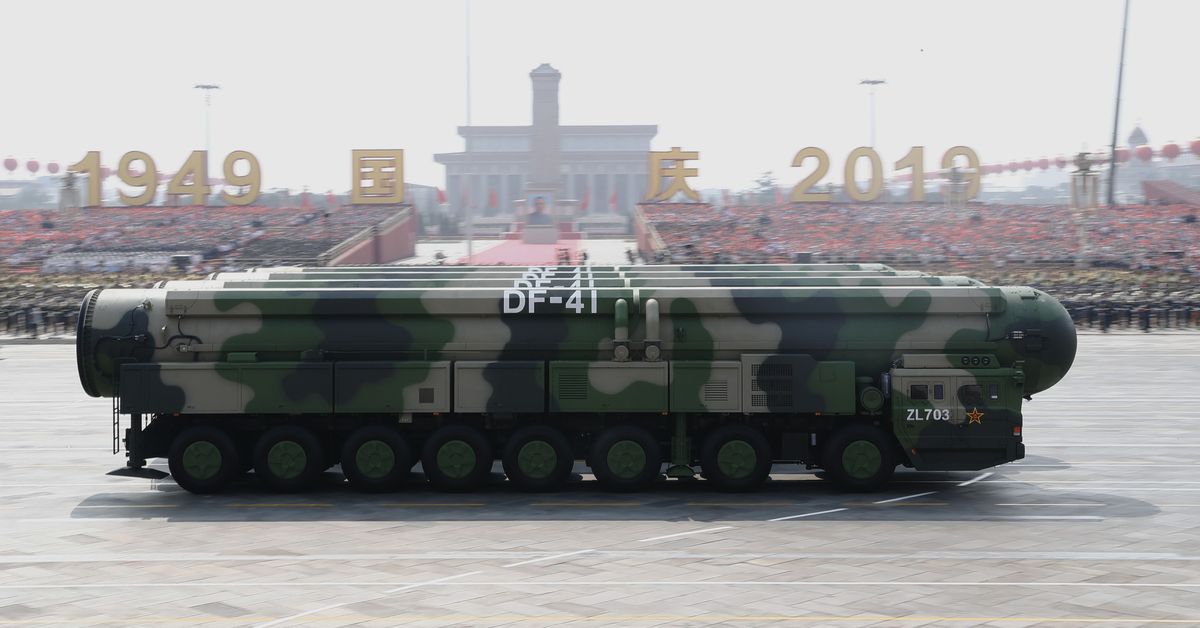 A new Pentagon report predicts China will double its number of nuclear warheads over the next 10 years. That certainly sounds scary, but the assessment actually offers a broadly reassuring message: Despite these expected advances, the US will remain the far stronger nuclear force well into the future.

The report released on Tuesday, titled “Military and Security Developments Involving the People’s Republic of China 2020,” is an annual report to Congress by the Department of Defense. While it doesn’t include any classified information, many China analysts eagerly await its findings to track what changes, if any, China has made to its armed forces or national security strategy.

This year’s iteration has many interesting tidbits, such as China’s outpacing of the US military in shipbuilding, but one in particular stood out more than others. “Over the next decade, China’s nuclear warhead stockpile — currently estimated to be in the low 200s — is projected to at least double in size as China expands and modernizes its nuclear forces,” the report says. It’s the first time the report has included an estimate of the number of operational warheads China has.

To put that more concretely, the US military believes China will have between 400 and 500 nuclear warheads available for use around 2030. That’s understandably troubling to read (and for me to write), but the goods news is that most experts aren’t overly worried about that finding.

“A doubling is not as scary as it sounds,” said Vipin Narang, a nuclear expert at MIT.

Three main reasons help explain why you can come out from under the covers now.

Don’t freak out about China’s nuclear advancements, at least not yet

The first reason the nuclear assessment isn’t so worrying is because, well, it isn’t actually that new.

Last year, Army Lt. Gen. Robert Ashley Jr. the director of the Defense Intelligence Agency, offered the same analysis during a speech at the Hudson Institute in Washington, DC. “China will likely at least double the size of its nuclear stockpile in the course of implementing the most rapid expansion and diversification of its nuclear arsenal in China’s history,” he said, noting his agency believed “the number of warheads that the Chinese have is in the low couple hundreds.”

What’s in the Pentagon’s new report, then, is just a codification of what Ashley revealed in that address.

Second, the US just has so, so, so many more nuclear weapons than China does that any growth in Beijing’s arsenal is somewhat negligible.

“The US nuclear stockpile numbers about 3,800 [active] warheads. That’s almost 20 times as many as China has now and 10 times what China is projected to build over the next decade,” said Jeffrey Lewis, director of the East Asia nonproliferation project at the Middlebury Institute of International Studies.

That means the US will have the larger nuclear arsenal for decades to come, likely dissuading China from attacking the US with a nuke. After all, America’s superiority means it could almost surely decimate Chinese cities and military positions before Beijing could do the same to the US — though a nuclear war between the two powers has the potential to end civilization as we know it.

In a way, the new buildup is China’s admission that it’s acted too late to close the yawning nuclear gap. “China doubling over the next couple decades is kind of ‘it’s about time,’” said MIT’s Narang. “China is late to the game.”

Third, another statement in the report makes clear that China may not be able to grow its arsenal beyond another few hundred warheads.

“China probably has enough nuclear materials to at least double its warhead stockpile without new fissile material production,” the report reads. In other words, Beijing couldn’t more than double its arsenal unless it produced more plutonium to build bombs, an effort the world — including the US — would detect pretty easily. “That would be expensive, slow, and visible,” said James Acton, the co-director of the Carnegie Endowment for International Peace’s nuclear program.

China, in effect, is stuck right where it is in terms of the number of warheads it can make. Any decision to go beyond doubling that stockpile would surely draw major condemnations, and perhaps retaliatory actions, from countries around the world.

None of this should lead to complacency in the Pentagon. As Acton told me, China still has enough warheads, and long-range missiles to place them on, “to destroy the US as a functioning society.” And other government reports make clear China’s military prowess could match America’s in just 30 years. It’s why experts think it’s a good idea for the US to seriously engage in China in arms control talks, among other things, as a way to blunt an arms race.

“The important thing to keep in mind is that China can afford a much larger nuclear force than it has now,” said Middlebury’s Lewis.

But if the Defense Department’s new China report says anything, it’s that one thing the US doesn’t need to be very afraid of is a massive, overwhelming Chinese nuclear force. It should consider that a win — for now.