The Communist Party accused Ren Zhiqiang of being disloyal. His lengthy sentence underscores Xi Jinping’s crackdown on dissent among the elite. …

Ren Zhiqiang, the property tycoon nicknamed “Big Cannon,” was notorious for his blunt criticisms of the Communist Party, and yet his wealth and political connections long seemed to shield him from severe punishment. Until now.

A court in Beijing sentenced Mr. Ren to 18 years in prison on Tuesday. The court said he was guilty of graft, taking bribes, misusing public funds and abusing his power during and after his time as an executive at a property development company.

Mr. Ren’s supporters and sympathizers said that his real crime was criticizing the Communist Party and calling the country’s hard-line leader, Xi Jinping, a “clown.”

“Very clearly this was punishment for his words, that’s going to be obvious to everyone,” Guo Yuhua, a sociologist in Beijing, said by telephone. “Those economic problems — this one, that one — can be concocted whenever you want.”

Mr. Ren’s punishment has underlined how far Mr. Xi has rolled back allowances for dissent, even from members of the elite like Mr. Ren, a scion of a Communist family and former friend of senior officials. His supporters also see the long prison term as a warning to others, especially elites, who may be thinking about openly challenging the party and Mr. Xi.

“Cracking down on Ren Zhiqiang, using economic crimes to punish him, is a warning to others — killing one to warn a hundred,” said Cai Xia, an acquaintance of Mr. Ren’s who formerly taught at the Central Party School, which trains rising officials.

“It’s a warning to the whole party and especially to red offspring,” Ms. Cai said, referring to the children of party officials. She spoke before the court’s judgment in a telephone 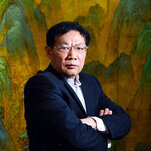