American officials said China had insisted that the Justice Department not proceed with cases against the arrested scholars, who are in the Chinese military and face charges of visa fraud. …

WASHINGTON — Chinese officials have told the Trump administration that security officers in China might detain American citizens if the Justice Department proceeds with prosecutions of arrested scholars who are members of the Chinese military, American officials said.

The Chinese officials conveyed the messages starting this summer, when the Justice Department intensified efforts to arrest and charge the scholars, mainly with providing false information on their visa applications, the American officials said. U.S. law enforcement officials say at least five Chinese scholars who have been arrested in recent months did not disclose their military affiliations on visa applications and might have been trying to conduct industrial espionage in research centers.

American officials said they thought the Chinese officials were serious about the threats. The State Department has reiterated travel warnings as a result, they said. Western officials and human rights advocates have said for years that the Chinese police and other security agencies engage in arbitrary detentions.

The threats are another striking escalation in tensions between the United States and China, which have been rising for years and have surged sharply since the coronavirus pandemic began in central China last winter.

But some analysts in Washington and Beijing say the Chinese government is trying to avoid any serious provocations against the United States before the elections in November. And some Chinese officials are aiming to cool the temperature of U.S.-China relations, whether President Trump wins another term or Joseph R. Biden Jr., the Democratic challenger and former vice president, takes over in the White House. 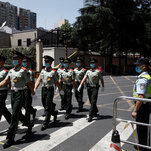