The Biden administration’s strategy to curb Beijing faces a stiff challenge as China uses its economic, diplomatic and military might to deflect criticism. …

ANCHORAGE — The Biden administration’s first face-to-face encounter with China ended Friday after a vivid demonstration of how the world’s two largest economic and technological powers are facing a widening gulf of distrust and disagreements on a range of issues that will shape the global landscape for years to come.

After an opening session on Thursday marked by mutual public denunciations, the two sides left an Anchorage hotel on Friday without any joint statement of their willingness to work together, even in areas where they both say they share mutual interests, from climate change to rolling back North Korea’s nuclear arsenal.

Secretary of State Antony J. Blinken argued that simply hearing how differently President Biden and President Xi Jinping of China, who celebrated a wary friendship a decade ago, were now pursuing their priorities was valuable.

“We certainly know, and knew going in, that there are a number of areas where we are fundamentally at odds,” Mr. Blinken told journalists after the Chinese diplomats left the venue without making any public statements or answering questions. “And it’s no surprise that when we raised those issues, clearly and directly, we got a defensive response.”

have shifted after years of encouraging the country’s economic integration, so have Beijing’s perceptions of the United States and the privileged place in the world that it has long held. The Americans, in their view, no longer have an overwhelming reservoir of global influence, nor the power to wield it against 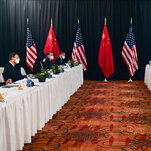