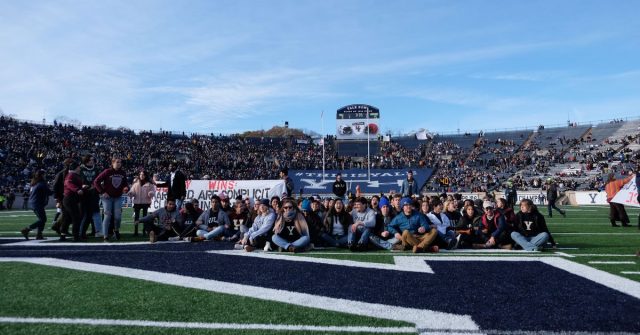 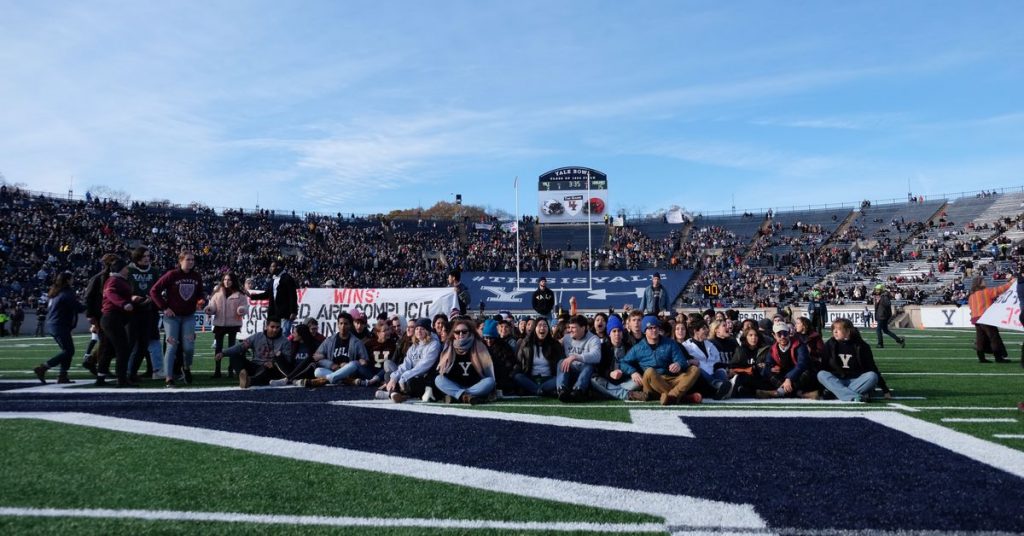 More than 150 students and alumni protesting the two institutions’ financial ties to the fossil fuel industry halted the annual Harvard-Yale football game Saturday. The demonstrators took to the field during the game’s halftime, demanding the schools sell their stakes in fossil fuel companies.

As Vox’s Umair Irfan has reported, both Harvard and Yale rely on funds, bonds, and assorted financial instruments to keep their endowments strong. Increasingly, students and alumni have become concerned that the institutions are profiting from the climate crisis, and see a divestment pressure campaign as a way to encourage the schools to invest in more environmentally responsible holdings.

Similar campaigns have been launched at universities across the US, and in September, activists celebrated a victory in California, when the University of California system announced it would divest from fossil fuels.

Harvard and Yale students are hoping for a similar outcome at their schools, and were joined in their Saturday demonstration by several hundred football fans, according to the Harvard Crimson. Those protesters and fans ignored calls from police to leave the field, reportedly chanting, “Divest” and “Disclose, divest, or this will be our death.”

Ultimately, around 50 protesters were escorted off the field by law enforcement officials, and the game resumed after a roughly 30 minute delay.

A growing student climate movement has placed renewed focus on the Harvard and Yale divestment battles, which began in 2012. Since then, climate action has only intensified, as Vox’s Umair Irfan has written:

Children have launched a series of school strikes to demand action on climate change. Young people in the United States are suing the federal government for profiting off of the fossil fuels that cause climate change. The Extinction Rebellion protest that shut down parts of London for weeks recently succeeded in getting the UK Parliament to declare a climate change emergency. Advocates are pushing lawmakers and presidential candidates to endorse ambitious proposals like the Green New Deal or offer their own alternatives.

Part of this is due to increasingly dire warnings from scientists, like the October 2018 IPCC report that found humanity has 12 years or less to limit global warming to 1.5 degrees Celsius. “Climate-related risks to health, livelihoods, food security, water supply, human security, and economic growth are projected to increase with global warming of 1.5°C and increase further with 2°C,” according to the report.

Failing that, scientists have said humans should shoot for a 2°C, a rise that would be even worse, as Irfan has explained:

Marine fisheries would face double the declines with 2°C of warming compared to 1.5°C. Maize harvests would decrease by more than double. Insects, including vital pollinators, would see their ranges decline threefold. Sea levels would rise by another 2 inches, putting an extra 10 million people at risk of coastal flooding and related problems. The number of people exposed to extreme heat at least once every five years doubles under a 2°C scenario relative to a 1.5°C scenario.

Stopping warming at 1.5C would involve an immediate, coordinated crash program of re-industrialization, involving every major country in the world. It would be like the US mobilizing for WWII, only across the globe, sustained for the rest of the century.

Acknowledging this reality, many activists have begun lobbying for change at the corporate level, arguing that pressure should be placed on polluters rather than consumers. And this is where divestment campaigns come in: in theory, cutting ties with fossil fuel companies stops them from benefiting from being associated with the names of prestigious universities and — if enough institutions divest — drains fossil fuel companies of resources.

However, as Irfan notes, there’s one major difficulty this strategy faces: owning shares of fossil fuel companies can make you a lot of money.

And although both Harvard and Yale have been careful not to use that fact as the reasoning behind their continuing refusal to divest, both have been openly resistant to finding alternative sources of income. In 2018, Yale’s chief investment officer David Swensen argued that divesting was foolish and ultimately unhelpful, because of the role fossil fuels play in daily life.

And Harvard has made a similar argument: “The day after, if we were to divest, we’re still going to turn on the lights,” Harvard President Lawrence Bacow has said. “We would still be dependent on fossil fuels.”

And both schools have also made the argument that by remaining shareholders, they will be able to guide the policies of fossil fuel companies through their voting shares and by applying pressure on management.

But protesters reject this argument.

“They believe that they can engage with these companies and get them to change their fundamentally extractive business models, which we think comes from a place of naivety amounting to gross negligence,” Yale undergraduate Nora Heaphy told the Guardian Saturday. “It’s absurd to make those kinds of claims.”

It remains to be seen whether Harvard nor Yale will listen to their students’ demands, but the divestment movement seems poised to sustain its momentum. As of September, activists with 350.org say there have been $11 trillion in divestment commitments from various institutions and wealth funds. “The rapidly accelerating pace of divestment commitments is striking: while it took two years to shift the first USD 2 trillion, the most recent USD 2 trillion has taken just under 6 months,” according to 350.org.