A court in Colombia is exposing atrocities in the country’s long civil war, trying to compile a record all sides can accept, and offering leniency to those who confess. Not everyone is pleased. …

BOGOTÁ, Colombia — The testimony is searing. “They tied me to a tree,” said one victim of Colombia’s guerrillas. “They put us in a cage,” said another. “I was kidnapped for four years.”

“Until then, I had not heard of ‘mass graves,’” said a victim of the military. “Finally I understand that those in charge of protecting civilians killed thousands of Colombians.”

After decades of civil war, Colombia has created a historic postwar court designed to reveal the facts of a conflict that defined the nation for generations, morphing into the longest-running war in the Americas.

Thousands have testified. Wide-ranging investigations are underway. The first indictments were issued in January — and the first pleas are expected in April. Perpetrators will be punished, with those who admit responsibility receiving lesser, “restorative” sentences, like house arrest or remaining free while doing hard physical labor. Those who refuse to do so will face trial, and the possibility of decades in prison.

Special Jurisdiction for Peace, could help change the trajectory of a nation that has been at war for much of its history, with one conflict rolling almost immediately into the next.

Its failure could mean the repetition of that cycle.

“We have a window — a generational opportunity — to leave behind the insane violence we have lived in all our lives,” said Ingrid Betancourt, a former presidential candidate who was kidnapped and held by guerrillas, sometimes in 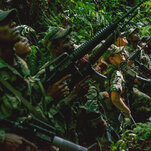