Both chambers of Congress continue to negotiate on a new stimulus package as the deadline draws near. …

Senators broke through an impasse late Saturday night over a Republican effort to curtail the powers of the Federal Reserve, clearing away what had been seen as the final hurdle to a deal on a $900 billion stimulus compromise as lawmakers raced against a Sunday-night deadline to avoid a government shutdown.

With time running out for a deal, Senator Patrick J. Toomey, Republican of Pennsylvania, agreed to narrow his effort to rein in the central bank, according to three aides familiar with the discussion. All three aides, speaking on the condition of anonymity, noted that the precise language was still being finalized.

The agreement was a critical breakthrough for lawmakers who have been racing to complete the emergency plan to rush direct payments, unemployment benefits and food and rental assistance to millions of Americans struggling financially during the coronavirus pandemic, as well as relief to businesses and funds for vaccine distribution. While negotiators were still wrangling over a number of smaller issues, the Federal Reserve language had emerged as the biggest impediment to a final agreement.

“If things continue on this path, and nothing gets in the way, we’ll be able to vote tomorrow,” Senator Chuck Schumer, Democrat of New York and the minority leader, told reporters as he left the Capitol shortly before midnight. “House and Senate.”

a second vaccine, by Moderna, and the country confronted another stark reminder of how desperately vaccines are needed: Friday’s record caseload of over 251,000 new coronavirus cases, nearly double the 128,000 people who had been vaccinated in the United States as of Friday, according to a New York 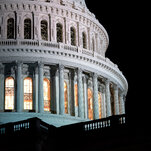