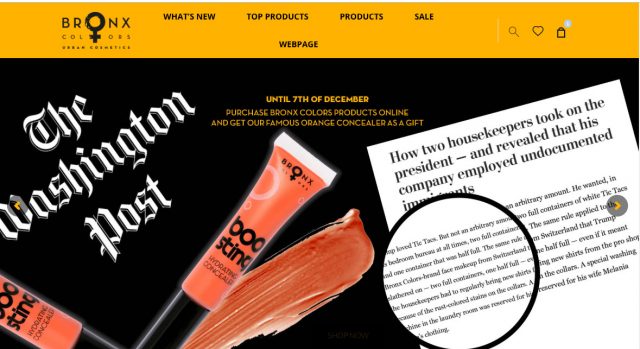 This week, The Washington Post published a story about the experience of undocumented workers employed by the Trump Organization, both before and during his run for the presidency. It’s full of anecdotes of hypocrisy and raises important questions about immigration and underpaid labor.

But buried many paragraphs into the narrative is a section detailing Trump’s unusually specific habits and requests, like requiring exactly 2.5 boxes of Tic Tacs in his bedroom at all times. Then came this sentence: “The same rule applied to the Bronx Colors-brand face makeup from Switzerland that Trump slathered on — two full containers, one half full — even if it meant the housekeepers had to regularly bring new shirts from the pro shop because of the rust-colored stains on the collars.”

The story moves right along into the president’s penchant for Irish Spring soap, never pausing to consider the remarkable fact that we finally have concrete information about Trump’s face. This is information reporters have been trying to find for years.

It’s a fact that Trump’s face appears as an unnatural shade of orange. But it’s not at all clear how it got that way. One theory is that he uses a tanning bed, which Omarosa Manigault claimed in her book; the White House denied it. This idea is supported by the fact that the skin around his eyes looks lighter than the rest of his face, possibly because of the protective goggles one wears in a tanning bed. One official told The New York Times it was “good genes.”

Last September, Trump complained about energy-efficient light bulbs (which his administration has tried to block) making him look orange to House Republicans at a policy retreat. Jason Kelly, a makeup artist who touched up Trump’s makeup during the Republican convention in 2016, thinks it is makeup on top of tanning. He told the paper, “When I see him, I see a line of oxidized bronzer around his hairline. The application is like a kindergartner did it.”

The current Post story doesn’t specify the exact product Trump allegedly used, but Bronx Colors, a Swiss brand, claimed it’s the Boosting Hydrating Concealer in orange. It even offered shoppers a special deal, splashing the Post’s story on its landing page: Buy anything on the site and get one of the orange tubes for free. It retails for €6.50, or about $7.22. The site has crashed multiple times since the story was published.

While these are all heady revelations, there are still lots of questions. Is Bronx Colors just trolling us? Is it really just as simple as Trump smearing orange makeup all over his face? How did he even find this particular brand, which isn’t currently sold in the US? Since there’s nothing I love more than political beauty investigative reporting — like the mystery of Scott Pruitt’s fancy hotel lotion and how exactly Stephen Miller’s spray-on hair works — I attempted to find answers.

What is Bronx Colors?

Bronx Colors is an inexpensive Swiss makeup brand that was founded in 2015 by Werner Kaufmann. A Refinery 29 story about the brand from December 2016 called Kaufmann a “beauty vet with 30 years of skin-care experience under his belt.” His jobs prior to Bronx Colors aren’t listed on his LinkedIn page.

Isabelle von Känel, the COO of Bronx Colors, cannot confirm that Donald Trump uses the brand’s orange concealer. “We are not sending him a product knowing that we are sending products to him, because there are different ways he can get it,” she says. Von Känel confirmed that she spoke to David Fahrenthold, one of the reporters who broke the story, who asked her the same question. He tweeted after the story broke that when he asked the housekeepers what makeup shade it was, one replied “una naranja espantosa,” which roughly translates to “a scary orange.” Von Känel says, “They mentioned how [the housekeepers] described it and it can only be that one,” she says, meaning the orange concealer.

The brand is currently only sold directly in a handful of European countries and the UK, but has wider distribution in about 40 countries. I couldn’t get my hands on it myself, because it does not ship to the US. There are only a few products from the brand available on Amazon.

However, it was briefly sold here and got coverage on a few lifestyle sites, like Bustle and Allure. Ulta, the specialty beauty retailer, carried it online for several months, from late 2016 until sometime in 2017. Von Känel confirms that Ulta stocked the brand online as part of a trial run. It was also a sponsor for Lifetime’s American Beauty Star, a Project Runway-like show for hair and makeup that first ran in September 2017. The show, which was thrown together too quickly to sign on big makeup companies as sponsors, worked with a lot of lesser known brands, according to a Beauty Independent story at the time.

Bronx Colors never really caught on. Perhaps that was for the best. One YouTube review, with over 300,000 views, was a brutal takedown. In the words of one commenter: “I feel like it looks like poop.” Von Känel confirms the brand didn’t really market the product enough and that it “wasn’t ready” for the US market. She says they have been in talks with distributors and retailers, including Walmart, to bring the product here.

Indeed, the Bronx-inspired promo copy echoes a slightly stilted and off-kilter view of the US that Euro brands sometimes have, describing the “northernmost district of New York City” where “the origins of hip-hop, breakdance and graffiti are pervasive and emphasize the urban lifestyle.”

The products are pretty standard if you’ve spent any time around makeup. It has all the usual items, like eye shadow palettes, foundation, eye liners, and yes, that orange concealer. The “o” in Bronx is rendered as the female symbol. This gives me pause, because knowing everything we know about Trump, would he use a product so blatantly marketed for women? Bronx Colors has three products specifically geared toward men, gendered via the male symbol; this concealer is not one of them.

First, a quick detour. Orange makeup is a specialty item, but it’s not rare. It’s meant to be a color corrector. In fact, von Känel says the orange one is their bestselling concealer. Orange is opposite blue on the color wheel, which means it can theoretically neutralize blue tones in the skin, most commonly found under the eyes. Orange color correctors can also be helpful for evening out darker skin tones, according to Alexis Androulakis, a makeup artist and the founder of Fempower Beauty.

“It’s never an on-its-own product. It’s a neutralizer and certainly most effective on the overall complexion for darker skin tones,” says Androulakis. Whether it’s used under the eyes to cover dark circles, or used on areas of hyperpigmented skin on those with olive skin or darker, it is meant to be buffed out so it’s not visible and so that a more natural skin-toned concealer or foundation can be placed on top.

Von Känel wouldn’t comment on any political implications or whether this attention could be negative, but she did say, “If he really uses it … then I would say, ‘Okay, Mr. President, I think you are using it a little bit wrong.”

The point is, you shouldn’t see any orange at all, because it’s not a skin undertone that humans have, according to Androulakis. “Orange just has all these negative connotations. It’s not very flattering. It’s really the thing we try to avoid in any type of shade matching exercise, period.”

When asked if she had any further opinions on Trump’s application process, assuming that orange concealer is the culprit, the makeup artist says, “He has a nickname for a reason. I’m just surprised in all these years he hasn’t consulted with an image consultant who can lead him down a different path.”

Donald Trump reportedly has rosacea, a condition that can cause a ruddiness in the skin. This is best color corrected with green-tinted products; Bronx Colors has one in its lineup.

How did Donald Trump learn about products like this?

There is evidence from as early as 2012 that Trump was using orange-y makeup. One of the same workers featured in this week’s Post story, Sandra Diaz, was interviewed in a 2018 New York Times article: “That same year, she said, Mr. Trump had an outburst over some orange stains on the collar of his white golf shirt, which Ms. Diaz described as stubborn remnants of his makeup, which she had difficulty removing.”

Since the year in question was 2012, there’s no way that makeup could have been Bronx Colors, since it wasn’t around yet. But that doesn’t mean he didn’t find the brand at a later time.

Nicole Bryl has been Melania Trump’s makeup artist since well before she became First Lady. Bryl has done makeup for celebs like Kathie Lee Gifford and Maria Menounos. She also kept a blog.

In a 2016 post she wrote, “Life these days can be exhilarating when words such as Trump. Makeup & Skincare are mentioned, especially during this 2016 campaign period…I have been asked this so many times through the years and I can honestly report that I know nothing about Mr. T’s hair and DO NOT and NEVER HAVE DONE HIS MAKEUP!” (Sic)

As a professional makeup artist, it’s not surprising she’d want to distance herself from his much-ridiculed aesthetic, but she has talked to him about products, as she chronicled in a 2013 post: “At dinner Mr. Trump was engaging in conversation. He asked me what my favorite makeup products were and why? Which brands did I think were cutting edge? He then …thanked me for my work which I thought was extremely generous of him to express out loud.” Again, this is pre-Bronx Colors, and Bryl had a predilection for super high-end brands. She herself sells a $450 skin care product.

She has also recommended color correcting. In a 2014 post about getting a “polished” makeup look, she wrote, “With a foundation brush, conservatively apply MAC’s ‘Prep + Prime CC color correcting’ all over face and neck which evens out skin tone, while also brightening the skin.”

A link to the product is broken, because it’s a range that MAC has discontinued. But it included orange correcting products, both lighter and darker ones. In 2014, a makeup blogger interviewed a MAC artist about the products, including the apricot-hued powders and cream, meant to be put all over the face. He said they were sheer and that the darker orange was meant to be used on deeper skin tones as a preparation step.

Again, there is no direct evidence that Bryl told Trump to put orange color corrector all over his face. And the sticking point for me in all this is: why Bronx Colors? It’s not exactly a household name.

I searched another avenue. Trump also had makeup applied for TV — with a much heavier hand — when he hosted The Apprentice. So I tried to track down some makeup artists from that era. According to the show’s IMDb page, Kathy Santiago was there from 2009 through 2017. A quick search confirms her specialty is men’s grooming. She would have had contact with him at a time when Bronx Colors was available in the US. Alas, she did not respond to requests for an interview.

We know a little more about Trump’s grooming habits, but not enough, in my opinion. I’m hoping Fahrenthold has more details to reveal. I reached out to him, too, just in case some important makeup tidbit got cut from the story. I’ll update if so. Feel free to email me at [email protected] if you have any tips or intel.

Orange you glad you made it through this?

Sign up for The Goods newsletter. Twice a week, we’ll send you the best Goods stories exploring what we buy, why we buy it, and why it matters.