An elite unit assigned to protect Crown Prince Mohammed bin Salman is said to have carried out dozens of operations, including forcibly repatriating Saudis. …

WASHINGTON — Seven Saudis involved in the killing of the journalist Jamal Khashoggi belonged to an elite unit charged with protecting Crown Prince Mohammed bin Salman, according to a declassified report on the assassination released on Friday. The New York Times has linked the group to a brutal campaign to crush dissent inside the kingdom and abroad, citing interviews with American officials who have read classified intelligence reports about the campaign.

The role of operatives from the so-called Rapid Intervention Force, or R.I.F., in the Khashoggi killing helped bolster the American intelligence case that Prince Mohammed approved the operation. “Members of the R.I.F. would not have participated” in the killing without the crown prince’s consent, according to the report.

The group “exists to defend the crown prince” and “answers only to him” the report said, and on Friday, the Treasury Department designated the Rapid Intervention Force for economic sanctions for its role in the Khashoggi killing.

Here is some of what is known about the unit:

The killing of Mr. Khashoggi was but one particularly egregious operation involving members of the group. The Rapid Intervention Force appears to have begun its violent campaign in 2017, the year when Prince Mohammed pushed aside his older rival to become heir to the Saudi throne.

According to American officials, the group has carried out dozens of operations both inside the kingdom and beyond — including forcibly repatriating Saudis from other Arab countries. The group also appears to have been involved in the detention and abuse of prominent women’s rights activists who had campaigned for lifting the kingdom’s ban on women 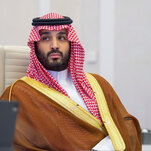