Dating Before the Election

Singles are putting their political affiliations and values front and center. It’s not just about Trump. …

Rebecca Cibbarelli, 23, was texting with a man on Hinge while Senator Kamala Harris and Vice President Mike Pence debated on her TV screen in early October. When she told her match what she was watching, he said he didn’t know who either of the people in the debate were, or which political office they were running for.

“We’ve been in a global pandemic for eight months, and there’s been so much social and political change,” said Ms. Cibbarelli, a mental health worker in Princeton Junction, N.J. “How have you not even taken interest in it when you’re stuck in the house? I was working 60 hours a week, I started school and I’m still keeping up.” Suffice it to say, things didn’t work out.

In a year marked by partisan debates over the coronavirus pandemic, widespread protests for Black Lives Matter and a presidential election, politics is reaching deep into the lives of Americans, affecting not only their families, schools, taxes and health care but also their dating habits.

Some singles want to know if their potential matches are civically engaged, even on a basic level. Others see their dates’ politics as indicators of compatibility.

A few daters expressed frustration about people who “virtue signal” — add phrases like Black Lives Matter to their profiles to show support for a cause — but do not seem to engage with the issues beyond their bios.

“You ask if they were at a protest, and it turns out that they weren’t or they give some sappy excuse for not being there,” said Jorge Clavo Abbass, 23, a graduate student and instructor at the Ohio State University. 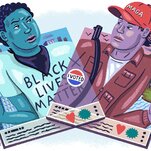