Honduras has barely begun to recover from two hurricanes that hit late last year. With relatively little disaster relief from the U.S., many are heading for the border. …

Honduras has barely begun to recover from two hurricanes that hit late last year. With relatively little disaster relief from the U.S., many are heading for the border.

SAN PEDRO SULA, Honduras — Children pry at the dirt with sticks, trying to dig out parts of homes that have sunk below ground. Their parents, unable to feed them, scavenge the rubble for remnants of roofs to sell for scrap metal. They live on top of the mud that swallowed fridges, stoves, beds — their entire lives buried beneath them.

“We are doomed here,” said Magdalena Flores, a mother of seven, standing on a mattress that peeked out from the dirt where her house used to be. “The desperation, the sadness, that’s what makes you migrate.”

People have long left Honduras for the United States, fleeing gang violence, economic misery and the indifference of a government run by a president accused of ties to drug traffickers.

Then last fall, two hurricanes hit impoverished areas of Honduras in rapid succession, striking more than four million people across the nation — nearly half the population — and leveling entire neighborhoods.

“People aren’t migrating; they’re fleeing,” said César Ramos, of the Mennonite Social Action Commission, a group providing aid to people affected by the storms. “These people have lost everything, even their hope.”

President Biden has insisted that the recent increase in migration to the United States is nothing out of the ordinary, just another peak in a long history of them, especially in months when the desert along the U.S.-Mexico border is cooler and more passable.

“It happens every single, solitary year,” 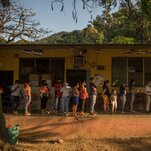