The beauty industry is now all about “wellness.” What does that mean for men? …

The commercials are always the same: A razor is likened to a racecar or a jet. A shower gel purports to make men smell like a bear. There are also truly absurd ads for male hygiene products, one of which has a shirtless, brawny Terry Crews popping out of another man’s beard to urge him to shave using a cream made by Old Spice.

To market any sort of self-care to men, many companies harp on an idea of extreme masculinity. There may be a few exceptions to the rule, like the anti-bullying short film that Gillette released in 2019, but usually everything is traveling at Mach 5 speed.

Is all this out of date?

In the past five years, skin care companies have increasingly conflated beauty with wellness. Sixty-five percent of Ulta’s customers linked the two categories together in a company survey, according to Monica Arnaudo, the chief merchandising officer at the company, adding that an even higher number of male respondents did so (3 out of 4) — even though shelf space for men’s skin care products has not increased notably in recent years.

“We are finding that the role of beauty is evolving to include a strong element of investment in one’s self,” Ms. Arnaudo said.

Though there are fewer scantily clad babes than yore, personal care products for men are still marketed through titillation: high-speed driving, loud noises and outlandish ideas of man and nature. But most men don’t find peace imagining themselves as centaurs. And nurturing one’s spirit can be facilitated by many activities.

One skin care line that is hoping 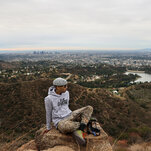