Down the Basement Stairs and Into the Past

Going through a box filled with memories prompted me to find people I hadn’t spoken to in decades. Am I the only one whose social life has improved during the lockdown? …

The huge cardboard box had been in my mother’s basement for decades until she said, “When are you going to move that crap to your house?”

The box sat in my basement for a few more decades, until my wife said, “When are you going to clean out that crap?”

Such language, but I got the message.

So while I have been trapped at home, I have joined the huddling masses that have decided to try to declutter, starting with my overflowing basement, with plans to tackle my closet next. Throwing stuff out is so liberating. Ancient computer parts, old shoes, cameras, things I clung to for seemingly no reason are now out the door.

But I didn’t have the emotional heft to tackle the dreaded box, about the size of a window air-conditioning unit, because I knew what was inside.

A few weeks ago, I finally lugged the box up to my office to start weeding it out. During Google video meetings, while my co-workers have tasteful books and art in the background, I have an old box. They are too nice to visibly wrinkle their noses.

Inside the box is a record of my past: mementos from high school, from my service in the U.S. Navy and from college. There are term papers (trash), hall passes (oddly, keep), clippings from my track meets (keep, my high school team actually played against Bruce Jenner’s) and 50-year-old Marvel comic books (keep and cash in some day). From the Navy, in which I served on the U.S.S. Sacramento in the South China Sea off Vietnam, I had plans of the day (keep one), Navy magazines (trash), photos (keep) and a 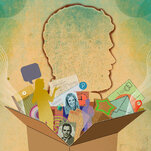