Ecuador’s Presidential Election Is a Referendum on the Past

The country, facing a pandemic and an entrenched recession, is seeing political debate revolve around the legacy of a long-gone leader. …

QUITO, Ecuador — Ecuador is holding a presidential election on Sunday, but the name on many voters’ lips is not on the ballot.

Here in Ciudad Bicentenario, a neat housing project on the Andean slopes of the capital, Quito, it is on Rafael Correa that most hang their hopes of overcoming the overlapping crises brought on by a pandemic and a recession.

A charismatic former president, Mr. Correa governed during an economic boom in the 2000s that helped many left-wing leaders in Latin America lift millions out of poverty and build a lasting popular following.

The leftist wave has since subsided; most of its leaders were accused of corruption and authoritarian overreach. Mr. Correa himself was convicted of graft, faces 35 other criminal investigations and is barred from running again.

But he, like other powerful leaders of the so-called Pink Wave, continues to loom large over the political landscape, polarizing the country and focusing debate on his legacy rather than on the reality facing Ecuador today.

From exile, Mr. Correa championed the candidacy of Andrés Arauz, 35, a little-known economist, as the standard-bearer of his political movement, known as the Correismo. The backing catapulted Mr. Arauz to the front of the presidential race, although some of his supporters barely know his name.

“I’m voting for my Rafaelito,” said María Obando, a 65-year-old pensioner from Ciudad Bicentenario, using an affectionate diminutive of Mr. Correa’s first name. When reminded that Mr. Correa is not running, she said: “It doesn’t matter, I’ll vote for his guy.” 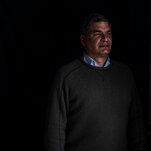