The U.S. insisted that new international guidelines on combating drug resistance omit any mention of fungicides — a demand that the industry made but that ran counter to science. …

The emails, from a pesticide industry lobbyist to employees at the Department of Agriculture, expressed alarm over proposed guidelines issued by a United Nations task force working to combat the rise of drug-resistant infections that kill thousands each year.

Ray S. McAllister, a policy official at the trade association CropLife America, urged U.S. agriculture officials to fight any effort to include the words “crops” or “fungicides” in the guidelines — a position that would run counter to growing international consensus that the overuse of antifungal compounds is a threat to human health by contributing to drug resistance and should be monitored.

“I want to make certain I am correct in assuming that this document and associated comments do not address fungicide use,” he wrote to an agency veterinary scientist, who warned that such a position would leave the United States isolated.

Mr. McAllister got what he wanted.

When the Codex Intergovernmental Task Force on Antimicrobial Resistance met in South Korea several months later, the American delegation insisted that the guidelines omit any references to fungicides, a stance that infuriated other participants and forced a monthslong delay in the task force’s work.

The emails, which were written in 2018 and obtained through a lawsuit by the Center for Biological Diversity, an environmental advocacy group, offer a behind-the-curtain peek at how the powerful pesticide industry influences policy decisions that can affect billions of people across the globe.

In a statement, the U.S.D.A. said the email exchanges were simply part of the agency’s process for crafting its official position. “It is the normal course of business for U.S.D.A. to solicit input from industry when developing 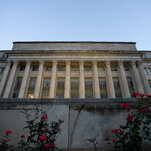