Europe’s virus numbers look like they did in the spring: high and getting higher.

People cross the Millennium Bridge in central London. Britain had the greatest surge in excess deaths during Europe’s first peak and still has the most reported deaths in the region. …

The weather has turned distinctly autumnal in Europe, but the pandemic looks much like it did in the spring, with cases climbing at alarming rates in nearly every country.

Britain, which had the greatest surge of excess deaths during the pandemic’s first peak in Europe and still holds the most reported deaths in the region, has recorded 151,391 new cases in the past seven days, according to a New York Times database.

In Germany, where 71,567 new cases have been documented in the past week, Chancellor Angela Merkel said she foresees a bleak winter ahead, and in neighboring Austria, Chancellor Sebastian Kurz evoked the possibility of a second lockdown as cases continued to spike.

Experts in Belgium, which has recorded 83,156 cases in the past seven days, warned that the country is entering a crucial week for its hospitals.

France has added nearly a quarter of a million cases — 241,473 — in the past seven days. On Sunday alone, the country reported 52,010 new cases, and the head of the scientific council that advises the government on the pandemic said that the real number could be over 100,000 cases per day.

Jean François Delfraissy, an immunologist and expert in emerging diseases who heads the panel, said in a radio interview on Monday that the situation was “difficult, not to say critical.” France has now surpassed one million total cases. Mr. Delfraissy urged a stricter curfew that could eventually be tightened into a lockdown, or an immediate lockdown “lighter than the one in the month of March” that would allow schools and some economic activity to operate.

In Belgium, 467 people are being admitted to 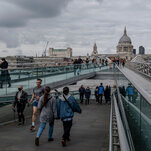