Everything’s a Joke Until It’s Not

Reddit communities grow powerful in plain sight. Why do they keep taking the world by surprise? …

On its face, Reddit is a huge collection of forums overseen by a single private company. It inhabits a gray zone between small, intimate communities with shared expectations and norms and the mega-platforms that tend to obliterate such things. Its business is to let people gather for free, generating communities and content, and then assigning value to that content so that it can be sorted and shown to millions more people, some of whom see ads.

Maybe Reddit is where you find interesting links and watch funny videos. Perhaps it’s a place where you hang out with a small group of friends, or post to a community of millions. More likely, it’s a place you’ve heard of and perhaps visited before, where you know people are up to lots of things, most of which don’t concern you, until they do. Like other social platforms, Reddit has struggled with harassment, hate speech and abuse, and sometimes banned communities whose influence concerned them.

For people who study social platforms like Reddit, WallStreetBets — a clear example of an insular Reddit community breaking through to the larger site, and then beyond — called to mind a specific recent precedent: The_Donald, the subreddit that was, for a few years, the staging ground and the central organizing platform for supporters of Donald J. Trump.

To be clear, these precedents aren’t necessarily about ideology or broad style. Some commentators have suggested that the activity represented by WallStreetBets and Trumpism are part of the same populist, anti-elite phenomenon, but if Trumpism in general is instructive at all here, it’s as a reminder that self-described anti-elite movements can, in fact, turn out to be much more complicated 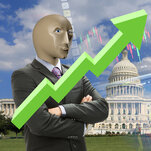