An advisory group’s recommendation will mean millions more Americans can be inoculated, extending protection against Covid beyond major urban areas into rural and suburban regions. …

Moderna is developing eight other vaccines that use mRNA. The company has tested them in animals and in 1,700 people, and has not had cases of anaphylaxis or other severe allergic reactions linked to the vaccine, Dr. Jacqueline Miller of Moderna said. One anaphylaxis case occurred two months after vaccination, in a person with a soy allergy. Anaphylactic reactions to vaccines generally occur within minutes or even seconds after the shots are administered.

Other side effects — fever, chills, fatigue, headache, muscle and joint pain — are much more common after getting the Moderna vaccine, especially after the second shot. Although the reported side effects are not dangerous they can be unpleasant, lasting one to three days. Doctors say the symptoms are comparable to those experienced by many people after getting Shingrix, the vaccine to prevent shingles. People should be prepared to feel under the weather for a day or two after each shot, they said, and may need to take a day off work.

Moderna’s study found that 91.6 percent of recipients had sore arms, 68.5 percent had fatigue, 63 percent headaches, 59.6 percent had muscle pain, 44.8 percent had joint pain and 43.4 percent had chills. Some participants also had swollen lymph nodes in the armpit on the side where they received the injection.

Company scientists emphasized on Thursday that the vaccine does not alter a person’s genes or interact with DNA, and that the mRNA is quickly broken down and does not linger long in the body.

Both the Moderna and Pfizer-BioNTech studies reported a small number of cases of a temporary facial paralysis called Bell’s palsy. Moderna found three cases in the vaccine group and one in the placebo group, and Pfizer had four cases, 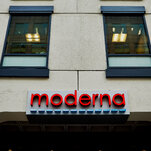