Facebook is taking down some, but not all, quarantine protest event pages 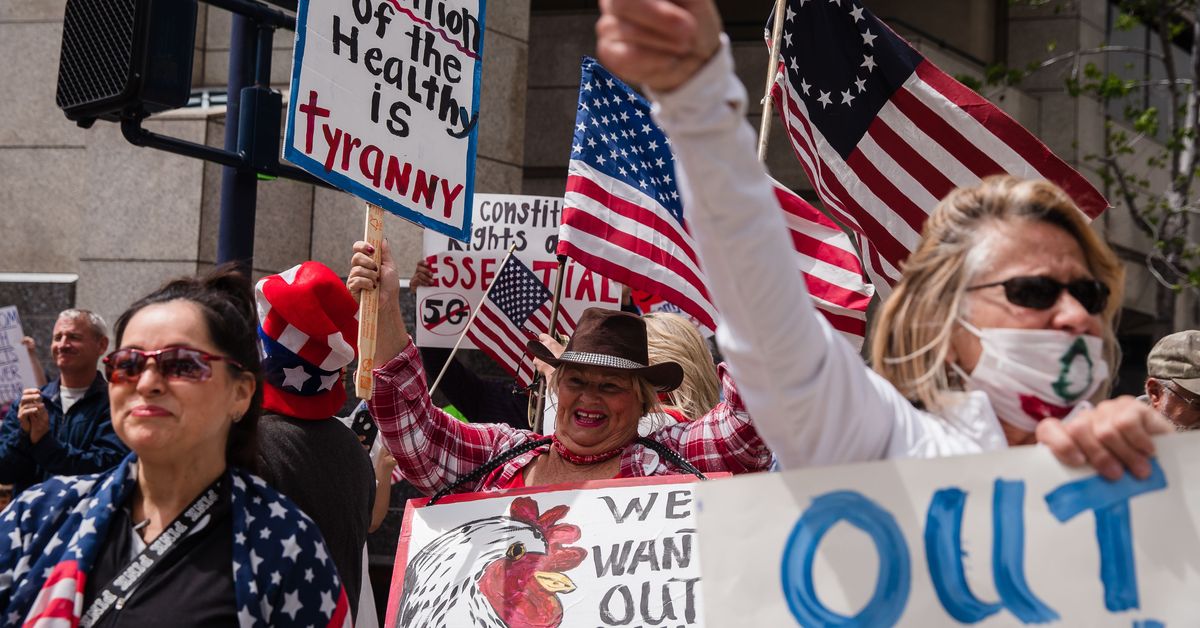 Facebook is taking down some event pages promoting controversial anti-stay-at-home protests that are taking place across the US — but it’s only doing this in areas where the events violate local Covid-19 social distancing rules. Facebook’s selective response mirrors a larger fracture across the country as the Trump administration has given conflicting guidance about how and when restrictions should be lifted and has largely left these decisions up to individual state politicians.

The move comes after Facebook faced criticism for allowing people to coordinate anti-quarantine protests on its platform. Public health officials, state officials, and health care workers say these protests are putting people’s lives at risk: By bringing people together in large crowds, they increase the chances of spreading the highly contagious disease. Others, including President Trump, have defended the protests, saying in a press conference on Monday that the protesters “love our country” and “want to get back to work.” Facebook’s decision to take down these posts comes at a time when the company is trying to step up as a leader in using big data to battle the virus’s spread while also battling efforts by some of its users to spread Covid-19 misinformation.

Facebook confirmed to Recode that it will take down some posts organizing protests in areas where the events go against local law — and for now, it’s only done so in California, New Jersey, and Nebraska. In other states, such as Pennsylvania, users are continuing to promote anti-quarantine protests on Facebook, with as many as 60,000 members in one Pennsylvania group alone. In response to questions from Recode about why Facebook took down some posts but not others and concerns raised about them doing so, Facebook spokesperson Andy Stone sent the following statement:

“Unless government prohibits the event during this time, we allow it to be organized on Facebook. For this same reason, events that defy government’s guidance on social distancing aren’t allowed on Facebook.”

The governors’ offices of New Jersey and Nebraska told Fox News and CNN that they had been in touch with Facebook about social distancing, but that they did not ask Facebook to take down the events.

In recent weeks, a small number of people across the US have taken to the streets to protest Covid-19 shelter-in-place orders, arguing that people should be allowed to return to work and resume normal life, despite the risks to public health in doing so. Millions of Americans are facing economic hardships after an unprecedented shutdown of public life and nonessential businesses. While polls show that a majority of Americans across party lines are afraid of prematurely ending social distancing, these protests are spreading across states. So far, anti-quarantine protesters number in the thousands, but they are a vocal minority.

These protests have been organized and gained publicity via Facebook’s events feature. While many of them appear to be organic posts started by concerned locals, reports by the Guardian and the Washington Post have revealed that many of them were actually started by established right-wing and pro-gun political groups.

In photographs and videos of these protests, many people are standing closer than 6 feet apart and without masks covering their faces, which poses a known public health risk to themselves and others. In one anti-lockdown protest in Colorado, local health care workers clashed with protesters, standing in front of them in their medical scrubs and protective gear.

Protest participants have argued they have a constitutional right to assemble. That’s one of the reasons why nonpartisan policy experts have raised concerns about precedents Facebook could set in shutting down efforts to organize these protests on its platform.

Facebook has historically been a powerful platform for organizing protests in the US and elsewhere, from Black Lives Matter actions to the 2017 Charlottesville Unite the Right Rally — a violent white supremacist gathering that resulted in one murder and several injuries. (Facebook eventually took down the main event page a day before the rally took place.)

Facebook CEO Mark Zuckerberg has repeatedly defended the company’s role in protecting free speech on its platform, particularly around politics. Many are arguing that the anti-quarantine protests should fall under that protection and that people’s civil liberties are at risk if Facebook shuts down such events.

But others say that while individual rights to protest are at stake, so is the health of the public.

“The problem isn’t civil liberties because these groups can build their own webpages and carry out conversation there,” Joan Donovan, the director of Harvard University’s Technology and Social Change Research Project, told Recode. “The overarching question is, ‘does Facebook have a responsibility to protect their users from health misinformation?’ If you think they should, then these actions are the correct course of action.”