And what else you need to know today. …

Want to get The Morning by email? Here’s the sign-up.

The U.S. gets closer to vaccines. And dozens of Republicans join the campaign to overturn the election.

President Trump’s attempts to overturn the election result are very unlikely to succeed. For that reason, the effort can sometimes seem like a publicity stunt — an effort by Trump to raise money and burnish his image with his supporters.

And it may well be all of those things. But it is also a remarkable campaign against American democracy. It has grown to include most Republican-run states, most Republican members of Congress and numerous threats of violence. I want to use today’s newsletter to explain it.

The new centerpiece in the effort is a lawsuit that the state of Texas filed this week with the Supreme Court and that Trump supports. It claims that the election in four swing states — Georgia, Michigan, Pennsylvania and Wisconsin — suffered from “unconstitutional irregularities.”

The suit is based on the same lies that Trump has been telling about voter fraud. In reality, there was no meaningful fraud, as local officials from both parties have concluded. William Barr, Trump’s attorney general, came to the same conclusion.

Nonetheless, the attorneys general of 17 states — including Florida, South Carolina, Tennessee, Indiana, Utah, Arizona and the Dakotas — have backed the Texas lawsuit. Yesterday, more than half of House Republicans released a legal brief supporting it. “If they get their way in court (they won’t), they would break the country,” David French of The Dispatch, a conservative publication, wrote.

They are doing so, 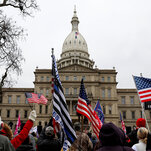