Movie theaters in China are being ordered to screen patriotic films with titles like “The Sacrifice” and “The Red Sun.” Elementary students in some cities are being told to create paintings and calligraphy extolling the “Chinese dream.” Buses and subways are broadcasting nationalistic messages about revolutionary heroes.

China’s Communist Party is gearing up for a patriotic extravaganza to celebrate the 100th anniversary of its founding on July 1. Officials are going into overdrive to make sure commemorations go off without a hitch — and hammer home the message that the party alone can restore China to what Beijing considers the country’s rightful place as a global power.

While much of the focus will be on the past, the party’s centenary will have significant repercussions for China’s future. The celebrations will give China’s top leader, Xi Jinping, a forum to present himself as a transformative figure on par with Mao Zedong and Deng Xiaoping. Mr. Xi, 67, is maneuvering to stay in power indefinitely, an effort that appears to have taken on greater urgency as a new American president builds alliances to curb Beijing’s influence.

“We need to educate and guide the whole party to vigorously carry forward the red tradition,” Mr. Xi said during a recent conference call with political leaders about the centenary, according to People’s Daily, an official newspaper.

trumpet China’s strength in a pandemic-ravaged world and justify the party’s increasingly tight grip on daily life in China. 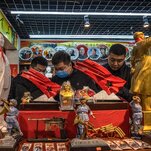