For Hong Kong Protesters Caught at Sea, Trial in China Is Likely

Detained by the Chinese Coast Guard as they tried to flee the city, the activists are now in the hands of the mainland’s opaque criminal justice system. …

HONG KONG — The 12 protesters who were caught fleeing Hong Kong in a speedboat last month have not been allowed to call their families. They have been denied bail and held without charge in a Chinese detention center. They have been barred from meeting rights lawyers appointed by their relatives.

Soon, they will face criminal charges related to their escape, and they are expected to do so in the mainland’s murky justice system.

In Hong Kong, they have become a potent reminder of the very same deep-seated anxiety that last year triggered large demonstrations and evolved into the most serious challenge to the Communist Party’s rule in decades. The protests targeted a proposed extradition law, since abandoned, that would have exposed the city’s residents to trial on the mainland, where courts are controlled by the party.

“This is what we had been fearing when we protested against the extradition bill, that people from Hong Kong could get sent over to China into a totally different system that’s well known for not following their own laws,” said Beatrice Li, the sister of Andy Li, an activist who was one of the people on the boat. 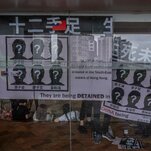