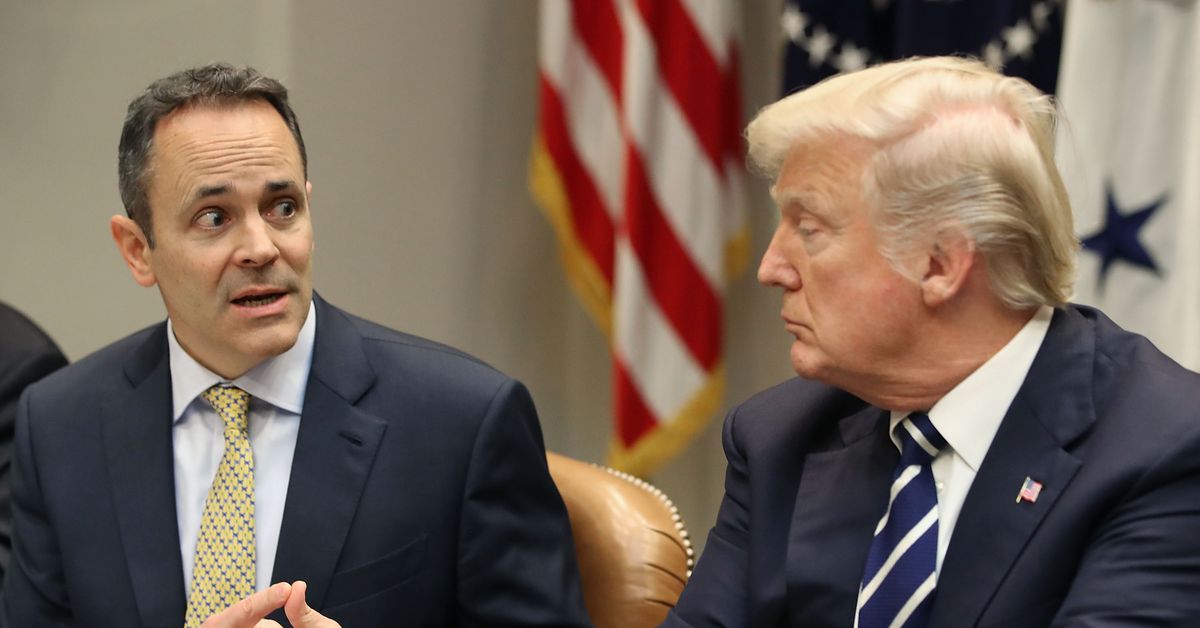 The decision has drawn criticism from both the left and the right, with Senate Majority Leader Mitch McConnell calling the pardons “completely inappropriate” and Beshear calling the pardon of Dayton Jones, who was convicted of raping a child, “wrong.”

Overall, the former governor issued 428 pardons, including Jones; a man who was convicted of killing his parents at age 16; and Patrick Brian Baker, who was convicted of homicide and other crimes, and whose family has raised thousands of dollars to retire debt from Bevin’s 2015 gubernatorial campaign, according to the Louisville Courier-Journal.

On Twitter, Bevin pushed back against “suggestions that financial or political considerations played a part in the decision making process,” calling such allegations “both highly offensive and entirely false.” He also wrote he issued the pardons because “America is a nation that was established with an understanding and support for redemption and second chances.”

But party leaders in the state do not agree. McConnell, who has represented Kentucky in the US Senate since 1985, told media at a press conference following his decision to file for re-election, “I expect he had the power to do it, but looking at the examples of people who were incarcerated as a result of heinous crimes — no, I don’t approve of it.”

And Beshear told NPR’s Here & Now that although he would not comment on all of the pardons, he was particularly bothered by the pardoning of Jones, whose case he worked on during his time as Kentucky’s attorney general. He said Jones had committed one of the “worst crimes” his office had ever seen.

“It was an awful case where a young man in high school was attacked, was violated. It was filmed. It was sent out to different people at his school,” he said. “I fully disagree with that pardon. … It is a shame. And it’s wrong.”

Republican state officials had similar worries. Kentucky Senate President Robert Stivers has advocated for the US attorney in Kentucky to investigate the pardons, and Republican Commonwealth’s Attorney Jackie Steele called into question why Bevin didn’t pardon Baker’s co-conspirators in robbery and homicide, arguing that choice seemed to suggest the donations of Baker’s family may have played a role in Bevin’s calculus.

Some Democrats have joined Stivers’ call for an independent investigation, and Senate Minority Floor Leader Morgan McGarvey (D) told journalists “Gov. Bevin’s pardons show what is a shocking lack of judgment and potentially an abuse of our system of justice.”

Bevin obviously disagrees, writing on Twitter, “The criminal justice system is intended to find the proper balance between justice for the victims and rehabilitation for the offenders … When it is not possible to guarantee more of either being accomplished by further incarceration, it is reasonable for a person to be considered for either a commutation or a pardon.”

What frustrates his critics, however, is that Bevin found that balance he referred to on Twitter himself, and sometimes did so by ignoring the concerns of judges, like in the case of his commutation of Paul Donel Hurt’s sentence. As Vox’s Anna North has explained, Hurt was convicted of sexually abusing his 6-year-old stepdaughter in 2001; several judges refused to overturn Hurt’s conviction despite his stepdaughter retracting her allegations due to what was believed to be a judge’s meddling in the case.

For Bevin, the pardons have become a controversial capstone to a complex criminal justice legacy.

In many ways, Bevin made criminal justice issues a priority during his governorship. In 2018, Bevin attended a White House prison reform roundtable and was present when President Donald Trump signed the First Step Act, which eliminates three-strike mandatory life sentencing minimums and gives some offenders the ability to petition courts for a review of their sentences, into law.

And during a gubernatorial debate this year, Bevin said the state’s prison population hasn’t increased while he has been governor. “We have expanded our prison population not one lick, I’ve made clear I’m not building more prisons,” he said.

As WFPL pointed out, that claim was not quite true, with there now being more people in Kentucky prisons than when Bevin took office in 2015, and more people incarcerated there than at any point in the state’s history. His efforts to reduce the number of incarcerated people — in part by reclassifying certain felonies as misdemeanors — failed.

He was more successful in expanding work release programs and in rolling back voting rights for the formerly incarcerated.

Beshear has reversed Bevin’s restrictions on voting, but will not be able to counteract the pardons. And those remain of deep concern to officials across party lines, although whether enough of a concern to merit an inquiry remains to be seen.