The police said the men started an illegal campfire, but experts said the region would remain vulnerable to more fires as climate change worsens dry conditions. …

MELBOURNE, Australia — Four people have been charged with unlawfully lighting a campfire that the authorities said sparked huge blazes on Fraser Island off the northeastern coast of Australia in October, ultimately razing more than 210,000 acres of the popular vacation spot.

A joint investigation between the local police and park rangers found that the men, aged between 21 and 24, lit an illegal fire at a campsite on Oct. 14. The authorities said that the fire then spread in a northwesterly direction, ravaging native vegetation and blackening more than half of the island, much of which is a national park known as K’gari that is renowned for its beaches, rainforest, and immense biodiversity.

The conflagration was ultimately controlled earlier this month after heavy rains helped firefighters contain the blaze. Residents said they were traumatized by the smoke and rapid evacuations, but no injuries or deaths were reported.

Local officials said that the men were cooperating with the authorities and felt deeply remorseful. A fifth male, 17, was also present, but as a minor has not been charged.

“They’re shocked and devastated,” David Harbison, a police official at Maryborough Station, near the island, said at a news conference on Tuesday.

“They were careless, but they never intended this to happen,” he added. “They didn’t deliberately set a fire to set fire to the island.”

The blaze was the first significant bushfire so far in Australia’s annual fire season, the ferocity of which scientists say is becoming increasingly difficult to predict. 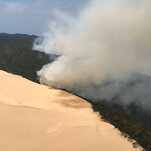