French Kill Man After a Fatal Knife Attack on the Street

France’s antiterrorism prosecutors are investigating the attack, which took place in a suburb north of Paris. …

PARIS — A knife-wielding man decapitated a teacher near a school in a suburb north of Paris on Friday afternoon and was later shot dead by the police, officials said, abruptly hitting France with a national trauma that revived memories of recent terrorist attacks.

A police officer and parents with knowledge of the attack confirmed French media reports that the victim was a history teacher at the school who had shown caricatures of the Prophet Muhammad in a class on freedom of expression, which had incited anger among some Muslim families.

The teacher, still unidentified by Friday evening, was immediately depicted as a martyr to freedom of expression across the political spectrum. Representatives in France’s Parliament rose to their feet to “honor the victim’s memory,” as the president of the session, parliamentary deputy Hugues Renson, declared. And President Emmanuel Macron hurried to the scene of the attack Friday night.

“This was an attempt to strike down the republic,” Mr. Macron said.

Seizing on the symbolic nature of an attack against a high school teacher, and reprising anti-Islamist themes he has lately emphasized, Mr. Macron said the teacher had been “the victim of a terrorist, Islamist attack.”

France’s antiterrorism prosecutors immediately took over the investigation of the attack, which happened at the junction of two adjoining Paris suburbs, Eragny and Conflans-Sainte-Honorine.

Much remained obscure Friday night in the absence of an official police narrative. But the underlying themes of what was known conjured up France’s recent history of 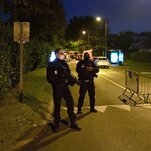